The Fight goes On

Once again I have been waiting to update you until I had definite news, but having had emails from irate and impatient readers who are desperate for news, I apologise but not much has happened on the election front.

Danilo came home, exhausted and depressed but threw himself into a long list of jobs I had for him which I will post about later, including building new hen houses, fixing fences, fixing the leaking roof, mopping Dominican style and a whole range more.

In the meantime the fight goes on and he has been gathering all of the proof of the fraud including witness depositions and video evidence and this has all been submitted to the court asking for a recount of the votes under strict scrutiny. The people of Guayacanes continue to be outraged but he has asked them to stay calm while he tries to resolve everything by legal means. If that does not work I have no idea what will happen next, but in a country which is trying to improve the education of children and teach them right from wrong - not to steal, lie, threaten, bribe, carry out fraud and cheat - one would hope that the government would believe in the same values. Maybe too much to hope.

The hearing should have been Wednesday, then Thursday and now tomorrow - but who knows. As soon as I know anything I will let you know.

Meanwhile he is here most of the time which is nice for me, and to be honest just as well as I got in the shower the other day, and while turning the water on, this is what I saw 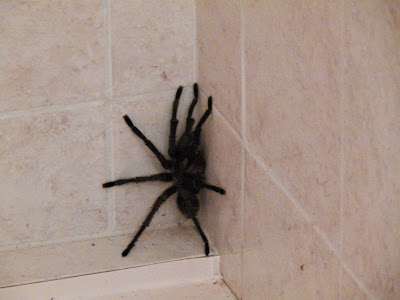 The tiles are 8 inches square just to give you an idea. I leapt out of the shower and luckily although Danilo happened to be in Guayacanes at the time, submitting all of the court documents he arrived home as my knight in shining armour  a few hours later and rescued me.

Now if you can't see very well you can see the little darling here on the brush and a million thanks to a very nice lady who sent me a fandabbydozy camera which takes great pics - and will be better when I learn how to use it properly.


Anyway it grabbed onto the broom and he put it outside in the woods. Today it is like four days later and the little sod returned and was waiting for me, swimming in the toilet when I went for a pee. 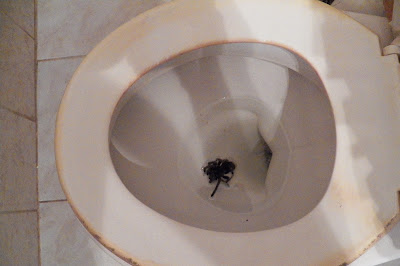 It was very much alive and swimming away so hopefully Danilo has put it back in the woods again and told it to stay there.

I will try and update in a few days with his building projects as well as the latest on the election front.