The tale of the missing toilet 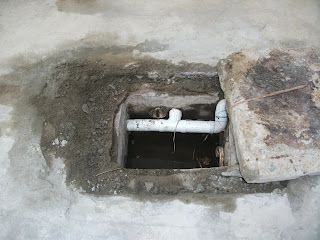 All was fine in the new house apart from the shower in stepson's bathroom which was blocked and the water would not drain away. The easy solution, I thought, was to buy a plunger and unblock it, and if that failed, to poke a bit of wire down the plug hole and unblock it. It was not to be. The owner's brother turned up and said that the pipe from the shower to the road had to be replaced which would entail breaking up the concrete yard and putting the pipe in and then cementing over it again.
There appear to be two types of waste water: 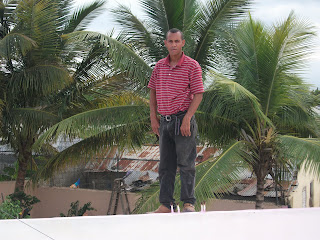 agua negra (black water) which goes into a septic tank and plain old dirty water from the sink or shower or washing machine. The later goes through pipes out into the street and on washing day most street around here are flooded with soapy water.
Anyway, the so called plumbers descended on us, broke up the concrete with pick axes and laid new pipe. Shower was still blocked. In the end they got a piece of wire, shoved it down the plug hole in the shower and pulled out a plastic toy. I said not a word.

The shower then worked perfectly.
The owner's brother then decided that there was a problem with the septic tank. For some reason he worked this out while standing on the roof. All seemed fine to me, but he insisted on opening it which involves breaking concrete again as they are always all concreted in. The lid was pried off
and the tank was full of what looked like dirty water. Now apparently the tank had been emptied a month ago, and they should only need emptying every several years, not months. In fact if it works really well it should last a lifetime. 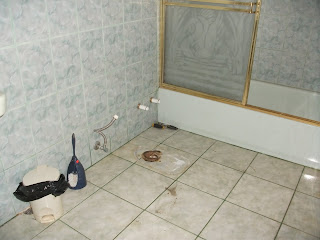 According to my husband they are supposed to be full of water, as some stuff floats to the top where there is a pipe and then it floats off somewhere. I have no idea where, and as there is no proper sewage system here, I assume it just floats off to another part of the garden - under the concrete. The solid waste which one assumes is heavier, sinks to the bottom where it supposedly biodegrades. So, once the owner's brother saw it was full, he summoned Robert, who is the sewage disposal man. Robert arrived with his pipes and sucked the septic tank dry. 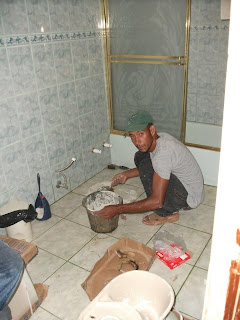 There was then a long discussion as to why it was full of water. My husband tried to tell them it was supposed to be, but was ignored. It was then decided that the walls of the sewage pit were being invaded by roots of the palm trees, and those roots were transporting rainwater into the sewage tank. Basically the reverse of everything I thought I knew, in that roots transport water to the tree, not the tree uses roots to transport water away from it.
They prepared to cut down the palm trees. Luckily they were dissuaded from that, and then I became aware of their next plan when I went to the bathroom to go to the toilet. The toilet had gone. Totally vanished. On returning outside I politely asked if anyone had seen the toilet and was informed that that particular toilet had too much water in it and it was that causing the problem. They were going to buy a new toilet. 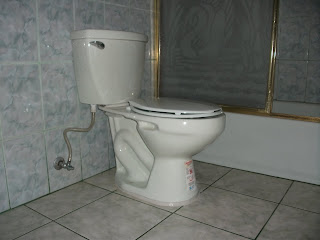 The new toilet arrived, and was eventually fitted. The septic tank was resealed with more concrete and everyone patted each other on the back. Problem successfully solved.
I still have absolutely no idea what the problem was, nor how removing a perfectly functioning toilet and replacing it with same model has solved anything.
Still every one is happy and the old toilet has disappeared to a new home somewhere.
Posted by Lindsay at 3:28 PM