Sad week in the campo

Last week was a sad week, as Leida, my neighbour, passed away. 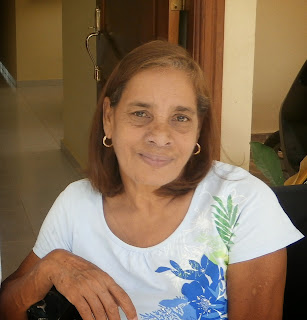 I blogged about her and her husband and their diabetes a couple of months ago. She had a stroke about three weeks ago and was taken into hospital. As is usual here, when they realised they could do nothing they sent her home so that, as I was told, "God could decide". She never regained consciousness and family and friends looked after her and fed her through a feeding tube in her nose. Her children arrived from New York and a few days later she died.

Funerals are arranged so quickly. She died at three in the afternoon and by four o'clock she was washed, dressed, made up and in her coffin, As is usual here, the coffin is left open on the dining room table and placed on large blocks of ice. The house filled up and everyone stayed up all night. There must have been around 100 people in the house and garden with cups of coffee to keep everyone awake. In the morning the hearse arrived and we drove very slowly to the church, some cars, motorcycles and many people walking.

The church was the local catholic church and it was full to bursting. For some reason whenever I am in church here I always remember that I am in the Caribbean. The fans were all on overhead, under the corrugated zinc roof, and they make that squeaking sound that overhead fans often do. The windows had wooden slats in them so there are stripes of sunlight throughout. Her coffin was in the middle of the church and the breeze from the fans was blowing the white silk frill, as well as her hair. The service was about an hour long and the priest invited everyone to go and visit the coffin to say their last goodbyes, and, again as is the custom, all the smart phones came out as people took their last photo of her. Many non Dominicans say to me how awful it is that people see the dead and take photographs, but if you explain to a Dominican how we deal with death, they are appalled at the fact that the family do not usually wash the body and even more appalled that the dead are kept in a deep freeze for a while before burial. If you mention cremation, hands get thrown up in the air in horror.

We then had to have another slow journey to the cemetery which was around a mile away down a dusty narrow steep track, surrounded by sugar cane fields. By now it was noon, and very very hot. The coffin was unloaded and she was viewed for the last time. I was surprised that no one was smashing the coffin to bits with axes and machetes, which is what usually happens to nice coffins so that no one steals it. The reason soon became clear as the coffin was placed in a breeze block box which had been built above ground, plywood was placed on the top and then two men mixed up cement on the ground next to the coffin and shovelled it in on top. No way could anyone steal that coffin.

We had to wait in the boiling heat with no shade until the job was completed, which took around an hour then home for a late lunch. Tomorrow is the ninth day when once again her house will be full as everyone says their last goodbye. The television will go back into the living room, and the shrine to her will be taken down. Then life gets back to normal.

Onto more cheerful matters. Monster. The latest is that he has a new job. He is the watchyman for the turkeys. 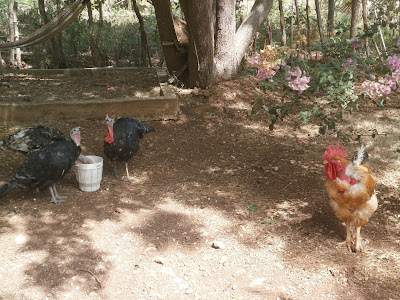 They all sleep together under the balcony at night, and he spends all day with them in the garden. 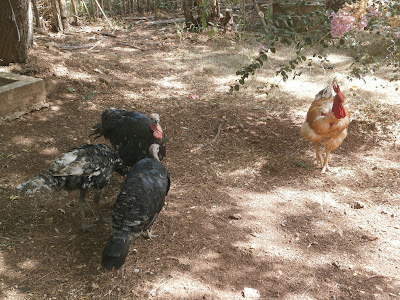 Mr Rapist stays on the other side of the garden with his harem, and if the neighbours' chickens want to come in, Mr Monster lets them in, but only if he can have a quickie first. 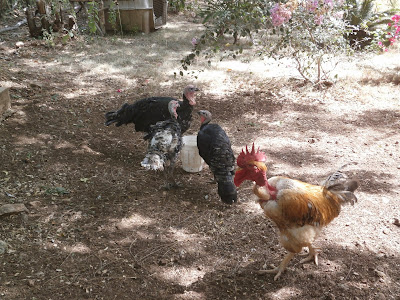 It is really cute and he seems to have got over the loss of Mrs Monster.
Posted by Lindsay at 8:12 AM