Life is not getting any easier at the moment unfortunately.

Having depressed you all with the stories of the unfortunate chickens, this blog continues with the cats.

I have had up to 12 cats at one stage but we are now down to only three. The others have departed this life through a whole series of unfortunate and some violent ends over the past 15 years. Some were barbecued for supper by Haitians, one fell down a well, some have died of cancer, one was shot with a 12 bore shotgun as the man did not like him playing with his chickens, one was run over, some were ripped to bits by the dogs, several were poisoned and a few went out one day and never returned so their end is unknown.

Of the three left, Zebedee is the least trouble. He is 14 years old now, son of Matilda and was one of a pair of twins – Zebedee 1 and Zebedee 2. They were inseparable, but number 1 went out a year or so ago and never came back. Zebedee spends his day on the bits of the balcony which are still standing or toasting himself on the satellite TV box when it is switched on.

His mother, Matilda is still with us, aged 15 having survived moves all around the country but she is now suffering from the feline equivalent of Alzheimer’s disease. She forgets where she is when she wakes up and emits a blood curdling howl until you explain to her that all is OK. This happens every couple of hours or so, 24 hours a day. She eats her lunch then forgets she has eaten it, and wants food five minutes later. Her latest trick is to sleep on top of the kitchen cupboards, near the ceiling, safe from the boisterous puppies, and then she rolls over and falls off. Somehow she always manages to land on her feet so far.

The third member of the feline clan is Mariposa, a tiny grey cat, who is three. She was a happy little bunny until a month ago when she was chased by puppy Grita Mucho into the woods and high up a tree. Now she refuses to leave upstairs and has to be fed there. She has managed to get outside sometimes as you hear a thump out on the dodgy balcony and realize she has jumped out of a bedroom window, but then she has to run the gauntlet of the puppies to get back upstairs again. Danilo put a tree trunk up against the upstairs balcony for her to use but she seems as unimpressed with his attempt at a cat escape mechanism as I was.

The one dog the cats all adore is Belinda, the Great Dane, but that is no more.

I knew she had some sort of heart condition as a couple of weeks ago her heart was beating very fast all of the time, she looked to be losing weight even though eating well and her breathing was fast and labored. Google advised me that it was probably congestive heart failure, common in Danes even though she was only four years old, and suggested a diuretic to get rid of the fluid buildup in her lungs. She had been on the tablets for three days and was perfectly fine. Eating well, leaping over the furniture, playing with the puppies, barking at the neighbours and anything which moved outside. Yesterday afternoon, around 4 ish, she was playing with the puppies as usual, fell over, screamed and was dead. It was over in seconds. I tried CPR but to no avail and kept looking at her to see if maybe she had just fainted - but no.

I then had to decide what to do with a 130 pound dead Great Dane in the middle of my living room. I called one of my neighbours on the phone and she answered but wasn’t home and told me to go and find her husband – he is the one who used to have the brain tumour. I called Danilo although I don’t know what I expected him to do, and understandably he said go for help to bury her. I locked the other dogs up as no neighbour comes near the house when they are loose and went for help. Two of the neighbours offered to come and help and said as they were elderly they would need a third pair of hands, so off I went to find a third, Berto, who took a little persuading but agreed to come. As I went to find him I noticed ex brain tumour man legging it on his motorbike. When I went back to the two elderly men, one had left, also on his motorbike and the other one, who doesn’t have many teeth, said he had to leave to go to church or something. I bgged him to stay and he shouted Berto who appeared and I took them round to the back of the house with the wheelbarrow. We would have to get Belinda down 10 steps and then wheel her about 800 metres to the dip in the garden which is the animal cemetery.

Problem one was the wheelbarrow had a puncture and was useless. Problem two is they refused to touch her and I wasn’t strong enough to lift her. I offered to try and put her in a few large empty dog food bags, thick plastic and they said no they couldn’t even touch her through plastic and they needed a rope. I had no idea where we had a rope,  so off they went into the garden and came back with palm leaves which they made into a rope, got me to put it around her head with like a long lead, and then they dragged her. They dragged her out of the living room, bounced her carefully down the steps and then dragged her through her adored garden all the way to the dip further down - the two of them walking ahead and Belinda being pulled behind them. They returned quickly and said they had left her there but not actually buried her, so I steeled myself for the task later as there was no way I felt like doing it straight away.

Danilo had called the boys – my stepsons, unbeknown to me and they turned up about 30 minutes later and went and buried her properly which I was very relieved about.

She was a fabulous dog and well loved and I thank her for not putting me through days, weeks or even months of watching her deteriorate as her heart became worse. The house is deadly quiet, I am not sure how long it will take the puppies to start wreaking havoc again mind – at the moment they have been silent since she died.

I was often one to say, “I don’t know what I will do if anything happens to xyz cat or dog,” but now I know. It is very sad but I have learned that I can cope alone if a dog has a heart attack and dies in front of me, it will not always be in an antiseptic vet’s office and you will not always have anyone with you.  I can cope if I am alone and have to deal with the situation, and if I did not have help as I did this time, I know that I can make a rope out of palm leaves and drag a dog through the garden to their grave. You think "I can't," then you realise "I can," and then you can say "and I did".

Belinda had friends from all over the world, several have been sending me pictures of her and messages which I am also very grateful for.  And Danilo, in his Dominican way, said last night, it is past. It is finished, no need to be sad any more. Dominicans have this amazing way of just keeping on trucking.

Talking about Danilo, 42 days to go and the JCE site have fixed their second hand! He is still doing well and a recent online poll put him well in the lead. 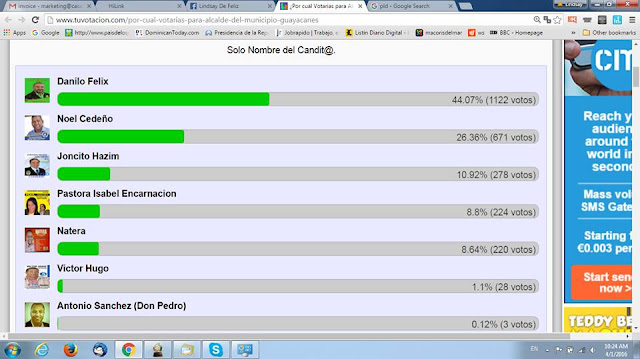 They spelled his name wrong - hope that doesn't happen this time around, but here is praying he gets the same results on the day, And now he has Belinda rooting for him from on high which I know is bound to help.
Posted by Lindsay at 4:57 PM

Email ThisBlogThis!Share to TwitterShare to FacebookShare to Pinterest
Labels: campo life, Cats and dogs and other animals, Dominican politics