When I first arrived here I loved the fact that there was music on the buses, in the supermarket, in the street, in the corner shops (colmados). There was dancing or singing everywhere, which made me feel as if everyone was happy. But the music is not played quietly in the background - Dominicans appear to have to have their music turned up very very loud. The most important
thing in the colmad

o is the sound system. It is turned on first thing in the morning when they open and then plays all day until closing time - around midnight. It is usually so loud that you can't hear yourself think let alone try and buy anything.
Houses all have stereo systems - the louder you can play your music the richer you are seen to be as you can afford a good system. The music is turned on first thing in the morningl to accompany the daily sweeping and mopping and is played most of the day. But what I don't understand is how people can talk to each other and hear each other when the music is so loud. I have become convinced 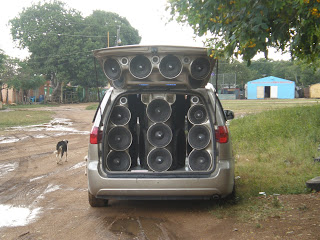 that the Dominican race has different voices and hearing to the English one. An English car will have a normal stereo in it. Look at this picture of a Dominican car! If you look inside the boot of any Dominican car you will find it full of speakers - no space at all for your shopping.
And it is not just the music that is loud. They speak loudly - especially on the mobile phone. My mother is always telling my husband to "Be quiet" as he talks so loudly. Maybe because the music is so loud that people learn to speak louder from an early age to make themselves heard.
In the afternoons people sit on plastic chairs in front of their houses and shout at each other across the street - they wouldn't dream of sitting next to each other. And if you want to talk to someone you shout out their name and they have to come to you. You would never dream of going to look for them. So living in a Dominican barrio it is a constant cacophony of sound, with the different music, with people shouting at each other, shouting for their kids!
I thought it was just me, being English, who found all this noise a little bit much sometimes. But yesterday the barrio fought back. 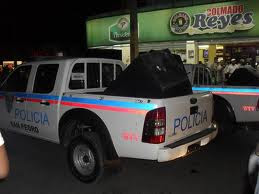 One of the houses here is owned or rented by a man who lives in Nuevo Yol (New York), and every month he sends money back for the family who live there. When the money arrives it is party time - day and night until 4am. The music has not stopped from Friday to Wednesday this week. The neighbours have had enough and yesterday told the family that if there is any more loud music they would call the police to take the speakers away - which is how loud music is dealt with here.
Since then total silence. It is the first time I can remember that Dominicans have turned down the music.

I went to the colmado this morning and even they do not have their music on. The only sound around is the geese, the occasional donkey, the dogs barking and the hens clucking - mind you this one in the colmado will probably spend the afternoon asleep.
Posted by Lindsay at 3:15 PM