How does your garden grow?


The book sales and signing session in Rocky’s Bar in Sosua was a great success I think. I sold 25 books and gave another 15 to people who wanted to sell them on. It was also lovely to meet people who had already read the book and wanted to talk to me about it, or to ask me to sign it for them.
Chivirico also signed books if people wanted him to and had a fabulous day. He said he felt very important but the best part of the day was his hot dog.


Back on the farm, we continue with the planting. A friend from Canada sent me some herbs so those have now gone in and everything else is almost ready for transplanting – apart from the parsnips which have yet to make an appearance. I am putting the occasional bag of ice over them whilst telling them that it is very frosty. Let’s see if that does the trick. Chivirico also loves helping in the garden, especially weeding although he does have some problems deciding which are weeds and which are plants. I pray he doesn't pull up my parsnips if they ever do make an appearance. 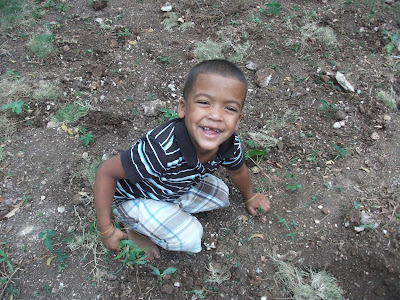 We are also laying turf. Well I thought that is what we were doing. As far as I remember it is long rolls of pre prepared grass, and you dig, rake and flatten the earth first, then put the rolls of turf down and roll it. Not the Dominican way. That way is to dig holes about a metre apart, and shove a tiny square of turf into the hole. Obviously saves a fortune on turf and I am assured that somehow all the turf will join up and it will become a lovely lawn. Methinks it has a long way to go. 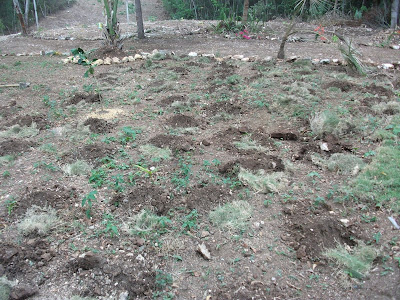 Given that so many people come to this blog and write to me about Sanky Pankys, when asked to enter a competition where I had to make a list of things about the DR, such as the 10 best restaurants etc, I decided to do 10 ways to spot a Sanky. You can read the article here, and please tweet, like, share it and comment. I doubt it will win as the best writing, but the article with the most social media activity and comments also wins a prize. The prizes total US$1,000 in Amazon vouchers so are worth having.

Have a great Easter everyone. We have Dominican friends arriving for the weekend and apparently all of the neighbours go to the river on Sunday. Should be fun!