Plumbing in the campo


As a child I loved Winnie the Pooh, and I loved to play Pooh sticks, which is when a few of you each throw a stick in a river or stream at one side of a bridge and run to the other side and see whose stick comes out from under the bridge first. 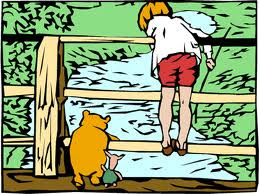 Today I have been playing not Pooh Sticks, but poo sticks. The downstairs toilet was blocked and all attempts to unblock it failed. So we dug up the garden and discovered that the pipe just stops in the middle of the garden and doesn't go to the septic tank. There is another pipe for the septic tank at right angles, buried under the soil here in the picture, although you can just see the end of it and a gap of a few feet between the two pipes. 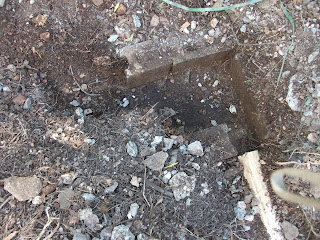 I suggested that we get more pipe to stick the two pipes together but was firmly told that was not necessarily as the gap between the two pipes was supposed to be there. I was also assured that the poo would come charging down the pipe from the toilet, bounce off the concrete block opposite the end of the pipe, like a billiard ball off the side cushion and head straight down the other pipe into the septic tank.

I decided to put it to the test and as no one was able to provide the necessary for the experiment, I used a piece of freshly made dog poo. It did shoot down the pipe, it then hit the wall, but did not bounce into the other pipe, it just broke up and sat there in the hole.  I will spare you the photographic evidence.

I was then assured that it would not be the same with human poo. I will test that later.

However I did some internet research and it appears that husband was right, and there has to be a manhole between the two pipes for cleaning access, and air apparently. And it looks like the pipes are at a right angle too. However I think the hole should be concrete and not just mud, so tomorrow we will buy cement and build the manhole. 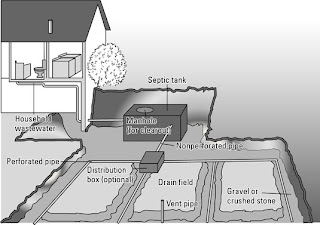 At the same time, there was a snake in the open pit between the two pipes. The snake would have had two options, go down the pipe to the septic tank, or go up the pipe into the toilet.

I know which one I would choose if I were a snake, and am now concerned about having my bottom bitten by a snake shooting up from the depths of the loo. Happy days.