Well we had an interesting experience the other night.

Danilo was doing his washing, as apparently I don't wash clothes like a Dominican woman. It appears I put dirty clothes in with less dirty clothes which you are not supposed to do as it makes all clothes dirty instead of all clean. Also I don't use enough bleach (as would like clothes to stay the same colour) and I use the spin dryer which I thought was to take the water out of the clothes so that they dry quicker but apparently it is not good and ruins them, so you have to take clothes straight out of washer, dripping with water, put on hanger and then hang on barbed wire fence.

Anyway, I digress. It was nearly 8 p.m. Danilo was doing his washing and I was deciding what to make for tea when there was a blood curdling scream from outside in the woods. We have a mahogany wood running the whole length of our land but only a couple of yards from the house. The chickens often go in it and roost in the trees at night, some even fly 20 to 30 feet up in the air to a branch. The dogs go there to play sometimes as well.

Danilo yelled that a snake had a chicken and went tearing outside in shorts and flip flops. I was instructed to follow. He ran to the wood and we could hear a chick screaming and saw its mum high up on a branch. I ran to get the machete and Danilo climbed the tree, stopping after a few feet so that I could pass him the machete.

We have a black hen, who had five chicks and she would spend the day in our garden and then take the chicks to roost in the wood at night. She was sitting on a branch making a hell of a racket while next to her, the snake was eating her chick and she was desperately trying to peck the snake to death, with zero success. Danilo got up into the tree, around 15 feet up, and promptly dropped the machete, so I passed him a stick and he proceeded to try and kill the snake with the stick. 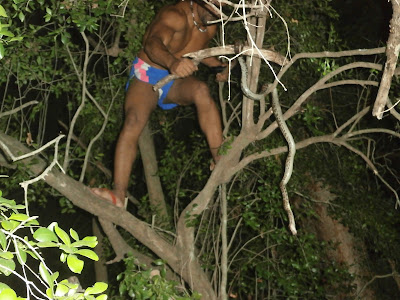 Mother hen flew off with her two remaining chicks, I was in charge of shining the torch and the neighbours appeared at the fence to see what was going on. I asked one to come and help and he said no, that he was scared of snakes!

It took a few minutes, and normally we never kill snakes but when they start eating the chickens it has to be done. 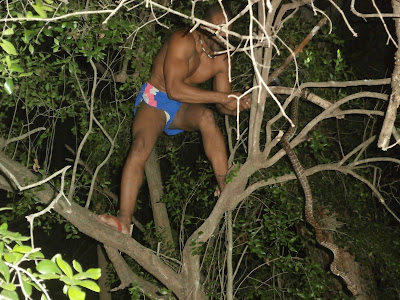 The snake was dead and once it dropped to the ground we could see that it was a Hispaniola Boa Constrictor. And not a small one at that. 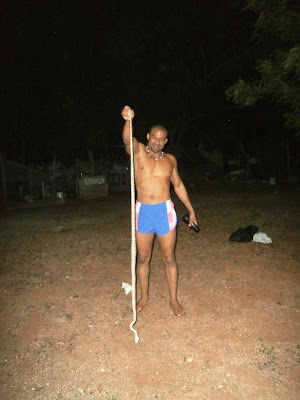 Apparently where there is one snake there are more, and Danilo assures me he can smell one (??!!) and it smells like a big one, in the area near one of the chicken runs, so we wait for another night. Apparently they feed at night as that is when the hens and chicks are up in the trees.

Meanwhile, the black hen is down to two chicks, and she very sensibly now brings them to sleep in the cellar, which is becoming a tad overcrowded at night. 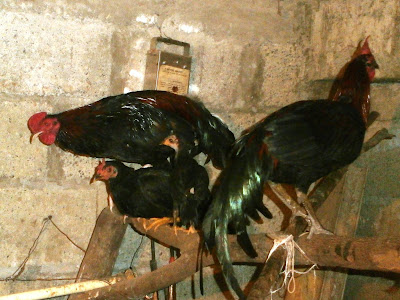 She also has a couple of roosters as security guards - one on each side of her and chicks. Meanwhile Sprout is also in the cellar with her brood at night and in the day she potters around the garden with them. 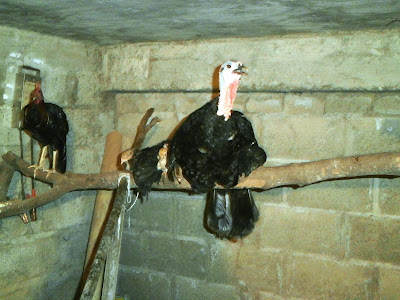 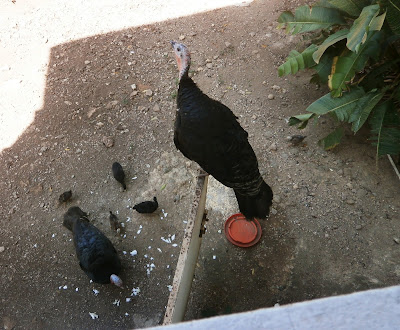 I had no idea turkeys could fly but if you have never had a turkey flying around your house, you have no idea the noise they make. They are like bloody helicopters. Here is a video so you can see what a mean.


On the political front, no news which I suppose is no surprise. It appears that the companies who will carry out the research have still not been selected, so we still need to wait and see what will happen.