Another month flies by and this month has been busy as usual. The highlight of the month was the visit of my American friend Tracy and her Dominican boyfriend Mario. Everything was organized as much as it can be here, but as usual everything went wrong.

Danilo was away playing politics on the south coast and was due back on the Wednesday or Thursday to help me clean the house and to buy the food. He had the bank card. Tracy and Mario were due to arrive by bus on the Friday. However, the political situation changed and Danilo had to stay longer - another week longer so I had to do the cleaning and I had no access to money as he had the card! As if that was not enough, Tropical Storm Erika decided to arrive on the Friday and the track had it first hitting the south coast, where Tracy and Mario were getting the bus from, and then making a north west turn and coming straight for me. 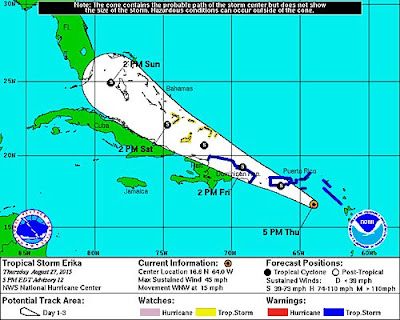 I tried to prepare as much as I could by buying candles and rum, as the electricity always goes out in a storm, and as usual the Dominicans looked at me as if I was crazy - storm, what storm? I must admit to being a tad smug knowing that at least I was prepared.

Tracy and Mario made it to Santo Domingo where it was windy and rainy as Erika got closer, and then managed to make it to my house. Erika at the last minute decided not to turn north west and carried on west. So nothing happened at all. Once again the Dominicans were right when it came to the weather.

The next day we had to go and get food, and a friend who lives here put money in my English account from her English account and I transferred money from my Dominican account to hers so that I could use my English card to get money. As I have still not managed to fix the car, we had to go on the bus. Well, if there was space. Three buses went passed full and eventually, after waiting an hour we managed to get on one. Into town, first job was to get money. I tried three cash machines and none worked so we decided to go to Banco Popular where I knew the machine took my card. The bank had disappeared. Gone, Vamooshed. Apparently it had moved to the outskirts of town, so I had to take a motoconcho there, by which time my British bank had cancelled the card as it had been tried in so many machines. A call to card services in India later, all sorted and at last I had some cash.


As Chivirico's birthday was on September 8, Tracy made him a cake, had brought him presents and Chivirico, my stepson Alberto, his wife Ana and grandbaby came over the next day for lunch. 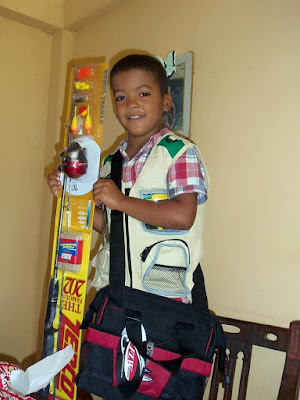 The granddaughter can now feed herself. 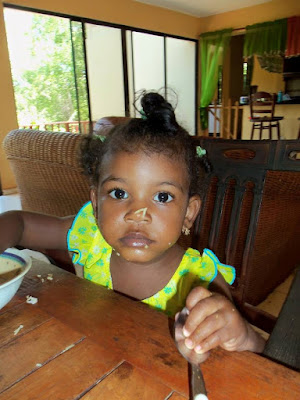 And Tracy put those candles which you can't blow out on the cake. Poor Chivirico, he blew so many times but made it in the end. 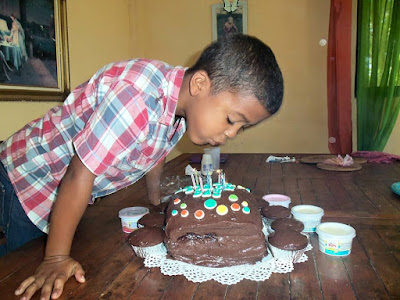 And off they went. Amazing here that the motorcycle law is that the driver must wear a helmet. But no law as to how many people on a bike, nor that anyone else should wear a helmet.And they have an hours ride like that. 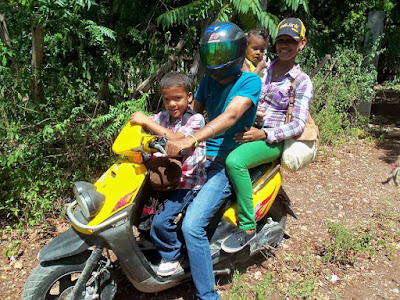 The pups are getting bigger. We still have six, one or two are being picked up next weekend, two go at the end of the month as the new owner is away and I am toying with the idea of keeping these two - Grita mucho as she screams a lot, 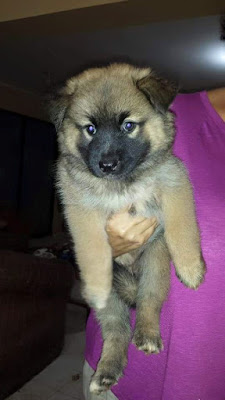 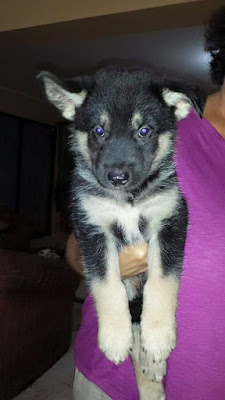 The head says no more dogs, but the heart says "oh they are so cute". Mind you the cats will be happy to see them go as they lay in wait for them in the cats' Dominican cat flap. 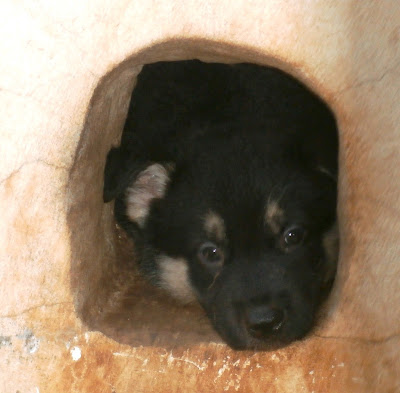 Tracy found it hard to sleep in in the mornings what with the cockerels crowing, loads of chicks chirping, the turkey gobbling and the neighbour's bull mooing. She was also fascinated by Stuffing the turkey strutting his stuff. 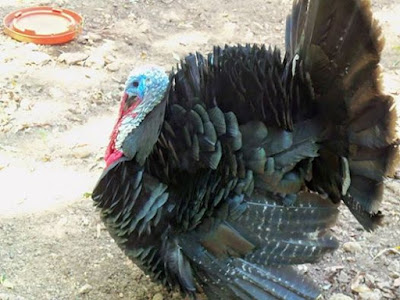 This next month should be interesting as within a few days we should find out if Danilo will be the candidate for mayor for Guayacanes. Yes, off we go again. He decided to stand again around a year ago and we thought the primaries to choose the candidate for each party would be in February. Then March, then April and so it goes on and here we are in September. It would take a while to explain what is going on, but I promise I will do so in the next few days.

Thanks to Tracy for all of the pictures in this blog.
Posted by Lindsay at 10:39 AM

Email ThisBlogThis!Share to TwitterShare to FacebookShare to Pinterest
Labels: campo life, Cats and dogs and other animals, chivirico, weather