The arrival of Rasputin

When Rin Tin Tin was poisoned not only was it very sad but we had also lost our only real guard dog, as the huskies would lick any burglar to death before biting them. Danilo contacted the breeder of Rin Tin Tin and asked if he had any the same as Rin Tin Tin, and as luck had it the mother had just given birth. She, the mother, is the daughter of Meg and Lobo and the father is a Belgian Shepherd.

Last week the puppy arrived. Danilo wanted to call him Rin Tin Tin again, but I said no, so in the end he settled on Rasputin. When I asked him if he knew who he was he said he was a merengue singer in San Pedro de Macoris. I explained that he was a Russian Sanky and played him the song by British group ( I think) Boney M.


He won't stop singing it.

When Rasputin arrived he was in a dreadful state and appears that the watchyman who was supposed to be feeding the puppies had left for a week, leaving them with no food and no water. This is what he looked like. 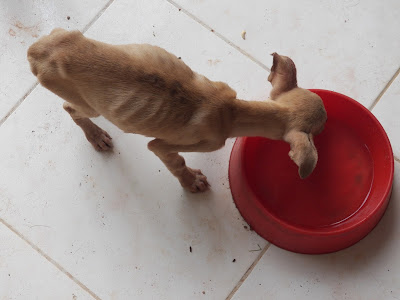 To be honest I wasn't sure he would survive and in addition to being painfully thin, he was covered in fleas 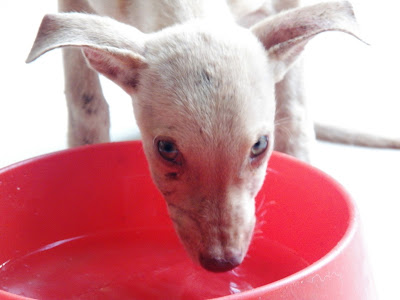 A week later, a diet of chicken and rice three times a day mixed with evaporated milk and water, a bath, a flea treatment and worming meds, he is a different dog. 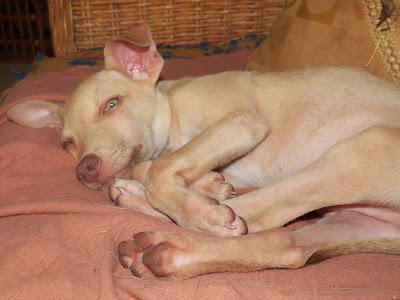 He still has amazing green eyes but has no ribs showing and is acting like a proper puppy.

The new book is going well, sales are steady and the reviews are fabulous which is a big relief to me as I wasn't sure it was as interesting as the first one. The publisher had assured me it was much better, and luckily it appears she was right. Here is a selection of this week's reviews.

"OK... I loved this book!!! I read it almost without stopping and before I knew it it was 5 am. I had read all through the night. It transported me INTO the story bc of the detail Lindsay described in her stories. I felt like I was a fly on the wall so to speak and watching it unfold. I also had a wide range of emotions whist reading. I teared up a few times, I laughed out loud, a lot. Having been a frequent traveler to the DR I could completely relate to a lot of the story. I've often asked myself if I COULD relocate there would I- after having read BOTH of Lindsay's books and went on the wild ride that IS her life I would say, YES... yes I would live there if I could. Her love of the island, the people, as a reader I FELT it. When I read I want to be taken away and I was. If you want a fun summer read, get this book and be prepared to be taken on an adventure full of ups and downs. I can hardly wait for book number 3. So glad to read you Lindsay."


"Life After My Saucepans captivated me, few expats have assimilated into Dominican life the way Lindsay has, and she takes us on a trip with her while she walks the life of a gringa in the Dominican campo. As someone who has been traveling to DR since 1975 and owns a home there, I can tell you that this book will open your eyes as to the "real" Dominican Republic, the one that tourists and snowbirds aren't privy to, especially if they haven't spent time outside the resorts and big cities or north coast of DR. Lindsay has the gift of painting a picture with her words, sweeping us along with her "Perils of Pauline" life in a mountain town.
I enjoyed the book, and wholly recommend it to anyone with any interest in the Dominican Republic, whether you are a resident, a potential or actual tourist, married to a Dominican, or just love non-fiction Caribbean life stories.
Do read What About My Saucepans first, if you haven't already done so!"

"Lindsay's new book is a wonderful story telling of the sometimes difficult, sometimes sad, but always joyful love story of an English woman and Dominican man. Her story telling ability reminds me of Junot Diaz in the humorous manner of explaining the cultural clash between two cultures and Lindsay's attempt to adjust to Dominican country life. This is a must read for anyone who knows Dominican culture or is thinking about moving internationally. Just a good book for anyone, absorbing and hilarious!"