Getting up in the morning 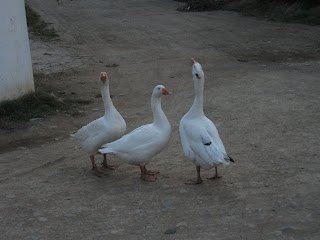 When I used to get up in the mornings in the UK, I would be woken up by the alarm clock, walk to the bathroom on plush carpet, hot shower, switch on coffee machine, pick up newspaper and mail from the doormat, and bring in the bottle of milk which was sitting outside the front door. It's not quite the same where I am now.
I am woken up at any time from 6am to 7am. Sometimes by the dogs barking, sometimes cocks crowing, sometimes by the geese which wander up and down the street attacking anyone who passes, and sometimes by the neighbours putting the stereo on so loudly our bed jumps up and down. If people have a stereo here they put it on as loudly so that they can show the neighbours that they can afford a good system.
The sun is almost always shining in through the windows. We have no glass, but metal slats which you can close if it rains. I walk to the bathroom, avoiding any dead animals which the cats have brought in overnight, usually lizards or spiders but the occasional baby rat or bird. I go to clean my teeth and have a wash, hoping that there is water. The water comes in by pipe but is turned off for 2 or 3 days at a time every week or so. When this happens I have to go into the garden and open the tap for the tinaco which is a big black plastic tank on the roof. Then we have water from the tinaco until it runs out, hopefully not before the mains water is on again when it refills the tinaco.
Then into the kitchen to make the coffee. No electric coffee machine but a greca, which is a metal old fashioned type of coffee percolator which you fill with water underneath and coffee on top and put on the cooker to boil. Coffee is grown locally, and when made in the greca it really is fabulous and worth getting out of bed for. 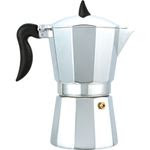 Unfortunately you need gas for the cooker to work and there is no piped gas in the country. Everyone has a little gas tank which you fill up at a gas station. The trouble is there is no way you can tell when it is going to run out so sometimes you are desperate for your coffee and there is no gas. If that happens you have to call a motorbike taxi, (motoconcho) or go yourself and take the tank to be filled.
Then it is hopefully time for a shower. I say hopefully as the hot watercomes from the shower head itself which has a little heater in it. When you turn the water on it is heated up as it comes through the shower head. But for it to work we have to have mains electricity. The electricity comes on twice a day for 3 to 4 hours a time. When there is no electricity we use an inverter which is attached to a bank of car batteries.

It works well, but so as not to drain the batteries the shower is not attached to the inverter, nor is the fridge. We also cannot iron nor use the microwave when the inverter is on. Apart from that it works well and it feels like we have constant electricity which is nice.
So, after hopefully having coffee and a hot shower, it is time for breakfast.
This is why I love this place. I just walk out of the back door into beautiful sunshine. Two yards away is the grapefruit tree. Once you have eaten a grapefruit straight from the tree you will be totally addicted to it. It is a completely different flavour. Unfortunately I have to wait until November for them to be ready. At the moment there are lemons on the lemon tree, and the mangos will be ready next week. We also have guava which are all year round, and passion fruit too. Plus at the moment there are guanabana which are large, green and prickly but inside they are delicious, with a soft white fruit which tastes a little like a sweet pear. 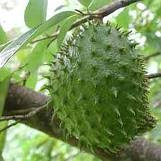 No post on the mat, as no postal service here, no newspaper and no pints of milk on the doorstep. But there is nothing like sitting outside in the sunshine in the early morning, listening to all the sounds, drinking fabulous coffee and eating fruit straight off the tree.
Posted by Lindsay at 11:58 AM