Most Dominican men would love to meet and marry a foreign lady. This is for a whole variety of reasons. Firstly is probably economic. Foreigners usually have more money, which is not difficult as the average wage here, for those who are working is around 100 pounds a month. They also can potentially give a Dominican man the chance to have a visa to leave the country, whether temporary or permanently. Many Dominicans dream of working and living abroad, believing the streets are lined with gold in what they call Nuevo Yol (New York). Another reason is status, which is very important to Dominicans. If you have a foreign girlfriend or wife, your reputation increases amongst your peers. And finally there is the relationship aspect. Dominicans believe that foreign women make better wives in that they are less controlling, less confrontational and less argumentative.

However, whilst several relationships between Dominicans and foreign women work well, there is, amongst the Dominicans, a breed apart known as Sanky Pankies. These are men who make a business out of relationships. They will usually work in tourist businesses, hotels, bars, tour 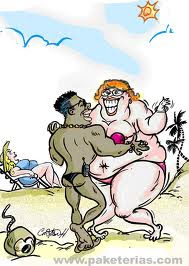 agencies, and their main source of income is making foreign women fall for them and then send them money on a regular basis. Those who work well will often have several women on the go at once.

For those people on the outside looking in on these relationships, it can be somewhat unbelievable that women would allow themselves to be scammed like this. However, Sankies can be very persuasive. Often the women have been unable to find a partner or love in their own countries, and Sankies appear to be totally unconcerned about looks or age. They can make a woman fall for them in days. Whilst the woman is on holiday they make some money, maybe have meals paid for them, or she will buy him a new mobile phone or some trainers. However, the real income starts once the woman returns home, desperately in love with her Dominican man. The ruses used to be that their mother was ill or they were in jail and could she please send some money. And for some reason the women always send the money. Over the past few years though, the Sankies have become more and more demanding and it appears to me that more and more women are being taken in.

If a Sanky believes he has someone who will send him sufficient money on a regular basis then he will say he has left his job, or he will actually leave it. He will use a variety of reasons such as his boss said he could no longer work as he has a foreign girlfriend, or, if the woman visits often, he will say that he cannot take sufficient time off work to be with her. They will then expect the woman to pay his 'wages'. These would have been from US$ 150 to maybe 250 a month, but they will increase this figure dramatically up to US$ 1000 a month. And the women will send the money. They will often ask for their rent to be paid. Usually they will live in a typical Dominican house with the rest of the family paying around US$30-50 a month, but suddenly they will say they live in an apartment which costs more like US$450 a month. When the girlfriend visits they will be in the apartment, but as soon as she leaves they will move out, but she will still send the rent.

They all use the "I am in jail and please help me get out" card. This can cost a serious amount of money such as US$ 5,000. Now, more and more are trying it for smaller amounts saying they have been stopped by the police for speeding, or for not wearing a helmet on a motorbike and if the girlfriend does not send money they will go to jail. Whilst it is true that once the police know a Sanky has a foreign girlfriend who sends a lot of money they will ask for a cut, they often work together with the Sanky to extort money.

The family will often become involved and help to take money from the unsuspecting girlfriend. The standard practice is to take the girlfriend to meet the family who are always very nice and always live in a basic Dominican house. Then the mother will become sick, and she may even call the girlfriend directly saying she has cancer or something equally bad. She will beg the girlfriend for help. The Sanky himself will often be sick, and fail to mention that Dominican Republic has public hospitals where treatment is free, although medicines are not. This is another way of raising a large amount of money.

However, whilst all of this is not right, the worst is when at last the girlfriend marries the Sanky and then obtains a visa for him to go and live with her in her country. Some have up to 6 women trying to get visas for them at the same time, and some even marry several times. The Sankies will say that they are working to get the visa and need money for a passport and each of the women will send money. Even if he only has one applying for a visa for him, very often once he arrives in her country he will leave her within a matter of months. She of course will be broken hearted and several thousand dollars poorer.

Not all Dominican men are Sankies. Not all of those who work in tourism are. But those who are true Sankies are expert con men who prey on foreign tourists who are often at a vulnerable stage in their lives. And they are becoming more demanding and more outrageous. If you do start a relationship with a Dominican man, you need to be aware of the potential Sanky ploys, and if you are already with one, try not sending him money for a while - see if he hangs around. if not, you know what he is.

If you want to know if your man might be a Sanky Panky, click on the tab marked Sanky Panky questionnaire at the top of this page or click here.