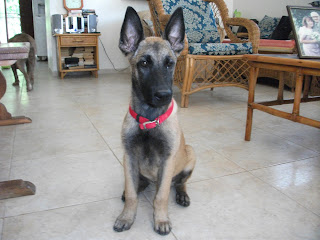 Shakira aka Shaka died yesterday. She was a Belgian Malinois, and was only 9 months old. Shaka was given to us by some friends who had a large litter of Malinois puppies and wanted to take them to a dog fair in the capital. Most hotels aren't too happy about a hotel room full of pooping pups so they came and stayed in our guest house and to to say thanks, gave us Shakira.

She was a typical puppy and more. Chewed everything, stole cushions from the house at every opportunity, and although was fabulous with the cats inside the house she would turn into a murderess if she caught them outside.

A couple of months ago she killed one the the neighbours chickens, which stupidly flew over the wall. The rule of the jungle here came into play and she was poisoned. That's what happens in the campo when you kill a neighbour's chicken. We did not know of any vets here but I phoned one who told me what to give her which I did, and then we discovered the local vet.

His name is Dr Francis. You can tell he is a doctor as he wears a special ring. Not sure if that is a Dominican or an American thing. Francis is very large and wears a vest, although he sometimes puts on scrubs if you are lucky. His surgery is only 5 minutes drive away, and in the main area it has 4 cages in it. One with 2 monkeys in, one with budgies, one with cockerels and one with rabbits and chicks in together. He also has a long line of jam jars with a Siamese fighting fish in each one. If you are feeling rich you can bet on a fish and they put two in a jar together and see which one wins. Makes a change from the lottery I suppose.

Francis is there 24/7 and you can call or visit whenever you like, he also loves animals. The trouble is I am not sure he actually knows what he is doing. Shakira has been sick on and off since the poisoning episode - each time the same symptoms, not eating, lethargic, and obviously very anaemic as her tongue and gums were very pale. He managed to cure her each time with diagnoses ranging from gastro enteritis due to digging up dead cat 3 times, lung infection, heart problems, cancer, and the latest was sickle cell anaemia. Anyway, this time she was very ill, and died whilst at his surgery. He performed a post mortem and said it was definitely poisoning and she was bleeding internally. Probably due to the first time. 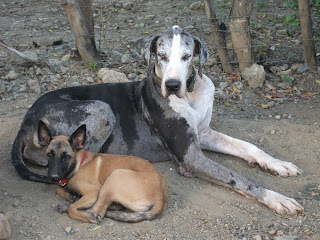 When I took her in for the last time he was busy stuffing a parrot, so am hoping he will not stuff Shakira. You can never tell with Francis.

I should say however that he successfully sorted Cojo's hernia and chopped his balls off at the same time. Cojo is the 3 legged cat. He also believes in natural remedies for the animals - raw mince for diarrhea and shark oil for chest infections - which I have not been able to find.

We will miss Shaka, always full of life and great fun. The other dogs are missing her too.

Email ThisBlogThis!Share to TwitterShare to FacebookShare to Pinterest
Labels: Cats and dogs and other animals