The good news and the sad news 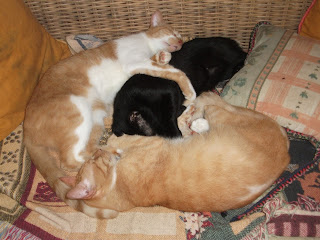 The good news is that Zebedee One has arrived in the new house and has stayed here for 3 days so I assume he is home to stay. Now I have all the cats present and correct. Here in the picture he is asleep with his brother and cojo who is my three pawed black cat. He was born with only three paws but it doesn't seem to bother him and he hops around quite happily.
The sad news is the harsh reality of living in a third world country. Whilst most of the time I love living here, there are times when the lack of education and knowledge and facilities hits me 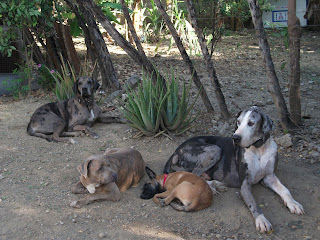 hard. There is only one vet here and he is very responsive, will come to the house if you call him, seems to really care for the animals, but I really am not sure how much he knows. In this picture are my four dogs. The little Malinois puppy died about a year ago. His diagnoses ranged from poisoning, to depression, to gastro enteritis and even diabetes. His treatment didn't work and she died. He said that the half pitbull next to her had a benign tumour. She lost weight rapidly and died. The one on the far left, Sophie, died last night. He said it was an infection and she had a raging temperature. Her temperature was 102 which is normal for dogs although he insisted it should be the same as humans. He gave her an injection to lower her temperature and then rechecked it, but wouldn't let me see the thermometer. He said it had tumbled to normal! It is always very sad when you lose a beloved pet, but when you have a feeling that had the vet known what he was doing, the animal maybe would not have died, it makes it ten times worse.
Most of the Dominicans have total faith in the vets and indeed the medical profession, but some of the things I hear doctors and vets say just make my toes curl. Tomorrow I will go and see the vet to pay the bill. I will present him with information that explains what a dogs temperature should be. I am not sure he will thank me for it, but it needs to be done.
Posted by Lindsay at 2:32 PM

Email ThisBlogThis!Share to TwitterShare to FacebookShare to Pinterest
Labels: Cats and dogs and other animals