Sensible place to put a tap - not. 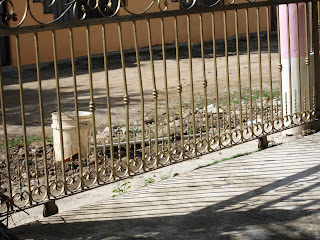 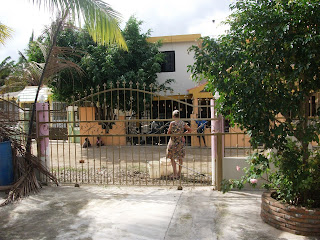 I have another neighbour, also called vecina (neighbour), which makes it easy as I don't have to remember names.  She lives to the left of us, two houses down.  She was away visiting her daughter for a while and someone stole the water pipes to her house. Understandably she was a tad miffed, so bought some new pipes and the vecino (male neighbour) from over the road dug up the road and put the pipes in for her. I wasn't convinced that he was a qualified plumber as he dug a channel in the road with his machete, and stuck the pipes together using the flame from a candle. Anyway, problem solved one would think.  No. She didn't have the money for enough pipe so the pipe stops outside my gate. He fitted a tap and now when she wants water she just comes to the front of my gate, turns the tap and fills up her buckets - as do a whole range of people!  She has promised that when she can afford it she will buy the rest of the pipe, so that we can drive the car out without breaking her pipe and tap.  I think I may be marooned here for a while. 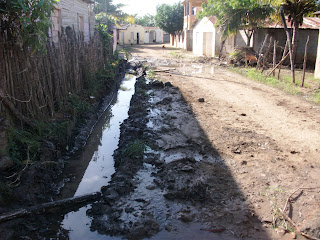 And the second slight technical hitch is that the vecino didn't do a very good job with his jointing of the pipes.  He did the work when the street water was off, which it is often and when it came back on, almost immediately there was a leak.  A big leak, in fact a fountain,and so we now have a river in front of the house.  Obviously the method of sealing water pipes with a candle is somewhat suspect. The water board wont fix it as they didn't do it, the vecino has gone away to family for Christmas, and so to leave the house now we have to don wellington boots, as we can't get the car out without breaking her pipe!  Happy days.