Help! There is a pterodactyl living in my bedroom. 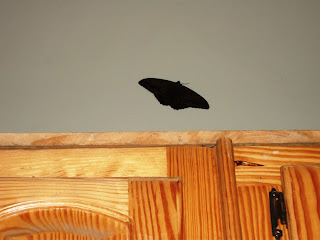 If you live here you have no choice but to get used to creepy crawlies.  I actually think I do quite well with rats and snakes and mosquitoes in that I don’t dissolve into hysterics when I see them.  And not all creepy crawlies are nasty. There are the nice ones like geckos which I try to encourage into the house to eat the mosquitoes, and I even give them names as they tend to hang around for a while.  I must admit to disliking cockroaches, as I am sure everyone does, especially the flying ones. They are hard to kill, as I read somewhere that if you stamp on them then eggs come out of some part of them and instead of one you end up with hundreds.  There must be some sort of spray that can penetrate their tank like shells, but the one the colmado sells is no use at all, in fact when you spray the cockroaches they lift up their wings and think you are giving them a spray of deodorant.  I am also not partial to the tarantulas that appear in the summer.  They are the size of side plates and exceedingly furry.  I know they are supposed to be nice and also eat mosquitoes, but I read somewhere else that they pull the hairs out of their bottom and throw them at you.  I haven’t actually seen it happen as when they wander into the house I don’t hang around to watch this particular party trick, but you can’t be too careful. 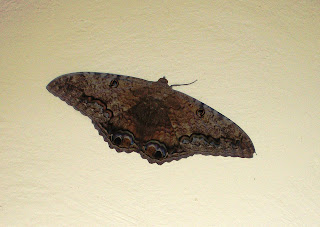 I particularly dislike flappy things.  Like pterodactyls.  And one has moved into the bedroom.  It has been there a week now and though I have never actually seen it move, it is always in a different place in the morning so it must move during the night which is a somewhat scary thought.  The bedroom ceiling is very high therefore I cannot get my husband to catch it and take it outside. So it is just living there on the wall above the macheted pine cabinet. And before you start thinking that it is just a little moth, it is enormous – about 7 or 8 inches from wingtip to wingtip and it has this thing poking out of its head, like a blood sucking proboscis.  Are there such things as vampire moths?