I have a cold 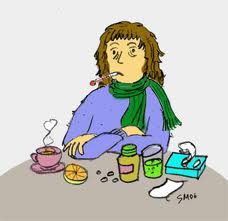 I have a very bad cold at the minute – a Dominican cold, which is known as gripe.  I know they are not the same as British colds, as when my Dominican husband had a cold in England he said to me. “There is water in my nose. Why is there water in my nose when I have not been in the swimming pool?” I explained that that a runny nose was the norm for a cold, and suggested he blow his nose to get rid of the water.  He did so and then ten minutes later: “The water has come back into my nose. Where does it come from?” I had no idea how to explain.

My Dominican cold is particularly nasty and everyone has been telling me how to get rid of it and how not to make it worse.  I should not get out of bed and put my feet on the cold floor, nor should I clean the house using disinfectant or bleach.  Both will make it significantly worse and the later may even put my life in danger.

To cure the cold I need a combination of limes, honey, garlic and mashed up onions. Someone suggested mixing with a little aloe vera which is grown everywhere here.  My husband said that when he was a boy in the campo the cure was to drink one’s own urine, or if you were unable to produce any then to drink someone else’s.  Luckily he assured me that it didn’t work so I will leave that off the list to try.

Another tried and tested cure is Veevapporroo.  Now it took me a while to work this one out in English.  It is of course Vicks Vapour Rub! And finally I have just met a man in the colmado who assures me that the only cure is shark oil.  You take a bottle of egg nog and mix the shark oil with it.  Keep in the fridge and then have a drink of it every day.  I have no idea how they get hold of the sharks nor where the oil comes from, and having been a diver I do not approve of the idea of killing sharks for their oil. Nevertheless, as Dominicans are always helpful, the man said he knows someone who has some so the shark oil is on its way here.  And I hate egg nog.

If anyone has any ideas for how to get rid of a cold I would be most grateful.