D is for Dominoes


Continuing my A-Z of the Domincan Republic, my D is the national sport, some would agree even bigger than baseball. Dominoes is played more in Latin America than anywhere in the world, and every few yards you will hear the clatter of the tiles being shuffled and the shouting and yelling that accompanies every game. 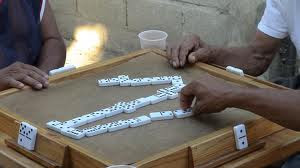 Dominoes apparently originated in China in the 12th Century and first appeared in Europe, specifically Italy, in the early 17th century. From there it spread throughout Europe and then the rest of the world. The name originally comes from the Latin, 'dominus' meaning 'master of the house', but was also the name given to a type of Christian priest, a Domini, whose hood was black on the outside and white on the inside. Domini is also the name of a Venetian mask which is black with white spots. To play dominoes all you need is a partner - known as a frente - and a board or table. The proper domino table costs around 20 pounds and has a little groove where you keep your dominoes, plus a hole for your plastic beaker which will usually be filled with beer or rum. The usual number of players is four, with several people watching, although people will play just with two as well. Day and night, the bars, colmados, and street corners are full of  men playing, dominoes, although women and even children will also play as well.. 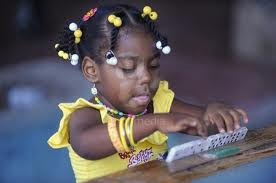 If you do not have a proper table, the tiles are held in the hand. The best players, or maybe the ones with the biggest hands, can hold all 7 tiles or fichas in one hand. My Haitian gardener could always hold all his fichas  in one hand, whereas I had to stand my dominoes up on the table until I learned how to have four in one hand and three in the other. 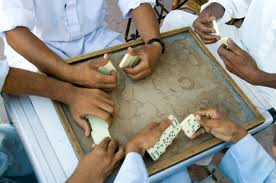 The game begins with all of the tiles being shuffled face down, as noisily as possible and then each person takes seven. The double six starts and then you carry on playing, matching the same number of spots until one person has used all of their dominoes. Dominicans are simply brilliant at it. Men who cannot read nor write, and who have never been to school will know exactly which dominoes you hold in your hand and can add up the number of points at the speed of lightning.  To be a good player you need to work well with your partner or frente, and those who play together often know exactly what to play and which tiles their partner has, based not only on counting but on facial expressions or subtle movements.  Dominicans will sometimes slam the dominoes on the table when they play, or shout a lot and I understand this is to cover up some signalling to their partner, or maybe it signals something in itself such as you have no more of that particular number. Sometimes people play for money, sometimes for eggs, and sometimes for clothes pegs.  It is not that you win a clothes peg - not exactly the most desirable of rewards - but that if you lose you have to peg yourself. 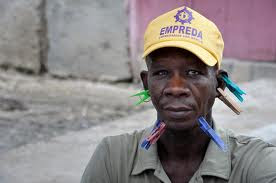 There are all sorts of rules, and words such as tranqua when you block the game so that only you can play - that is worth 25 points to you and a peg to each of your opponents.  And if you win by being able to go out at either end of the snake of dominoes, it is called capicure, which you have to shout out loudly, whilst banging the domino down on either end, several times.

Dominoes is noisy and fun but played very seriously. It is an intrinsic part of Dominican culture, albeit it can be a little painful if you are not a very good player, as this Haitian found out when playing after the earthquake. 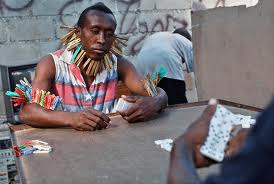