E is for Enriquillo and Empanadas

Letter 'E' in my A-Z of the Dominican Republic. I have added two button on the side bar. One will take you to my A to Z and the other to a site which has everyone else's A to Z from around the world.

Enriquillo was a Taino Indian who rebelled against the Spanish after they had colonised the Dominican Republic. When the Spanish originally arrived, everyone was friendly to each other but unfortunately it didn't last, and the Spanish soon enslaved the Tainos. Obviously the Tainos didn't like this very much and Enquillo's father, who was a chief, met with the other chiefs to have peace talks with the Spanish. The Spaniards murdered them all by burning down the meeting room, leaving Enriquillo to be raised in a monastery in Santo Domingo.  At that time he was called  Guarocuyo, but when he was baptised into the Catholic faith his name was changed to Enrique, to be known as Enriquillo because of his short stature.  In 1522 he led a successful Indian revolt in Bahoruco in the south west of the country, which eventually led to a peace treaty being signed.

Unfortunately it was too late for the Indians, as apart from those who had been killed, the rest were dying out rapidly from disease brought by the Spanish such as typhus, smallpox, influenza and measles.

Enriquillo himself died from tuberculosis in Azua on 27 September 1535, but is known throughout the country as the leader of theTaino revolt. He even has the biggest salt water lake in the whole Caribbean named after him.

Many Dominicans like to believe they are descended from the Tainos, and although this idea has been rejected by many historians, saying that the Tainos all died out, it is interesting to note that the 1514 census states that 40% of the Spanish male settlers had Taino wives, and scientists have confirmed that Taino DNA is present in many Dominicans, especially those from the South West. My husband swears he is a direct descendant of Enriquillo, and has a great aunt who lives in the village of Enriquillo in the South West who is known as 'the Indian'.

What is also interesting is that according to a book by Kirkpatrick Sale called "The Conquest of Paradise", Christopher Columbus wrote to the King of Spain about the indigenous Taino Indians saying:

"They traded with us and gave us everything they had with goodwill. They took great delight in pleasing us. They are very generous and without knowledge of what is evil, nor do they murder or steal. Your Highness may believe that in all the world there can be no better people.  They love their neighbours as themselves and they have the sweetest talk in the world and are gentle and always laughing".

I have always wondered where the spirit of Dominicans came from, and  I find it fascinating that Columbus could have been talking about many Dominicans today. 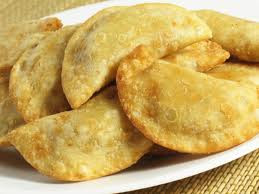 My second 'E' is for empanadas which I understand are available in many countries.The word comes from the Spanish word 'empanar' which means to wrap in bread.  Here they are also known as 'pastelitos'  or 'little pies'  and are pastry filled with savoury fillings, such as shredded chicken or beef or cheese, and then deep fried. They are standard street food and are found everywhere.  They are delicious as a snack, and there is nothing better than sitting in the park - every town has one - munching on a fresh warm empanada and drinking freshly squeezed passion fruit juice, watching the world go by.

If you would like to try making them, here is a great recipe from Aunt Clara.