The whole idea of cockfighting is pretty horrifying to me, but it is a major part of Dominican culture, some say the biggest sport after baseball. It dates back to before the Spanish arrived and is enjoyed by rich and poor alike.  The word for cockerel is gallo in Spanish, the cockfighting ring is a gallera and the man who owns the bird is called a gallero. Plenty of letter G for this post in the A-Z of the Dominican Republic. I did consider calling the post "Dominican men and their cocks" but I thought people searching on Google may end up being disappointed. 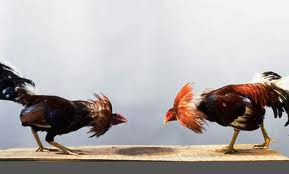 The fighting cock apparently originated in India more than 4,500 years ago and is usually a very colourful bird, bred to be aggressive. It takes around 18 months for him to reach maturity, during which time he is completely spoiled by his owner, often living in the house, sleeping in his bed, eating the very best food and treated better than the wife or children. Just like boxers, weight is essential and the feathers on the chest and belly are often removed to give them less weight and more speed so they tend to look a tad odd. 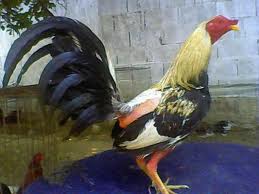 Every town will have an arena or gallera, and on the day of the fight everyone goes to the arena where the cocks are weighed and resin spurs are fixed on. This is a time for fun and laughter, gossip and betting. There is a referee in charge of proceedings and the owners whisper instructions to their cockerel, who I assume understands them. Once the fight starts, all hell breaks loose with people screaming and shouting and betting. The fights are timed and will go on for the set amount of time or until one cock dies or gives up. 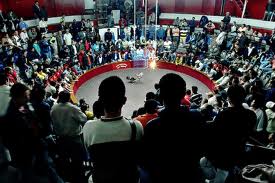 The cock will usually only fight once or twice a month, and once they have won at least 9 fights then they can be given a name, before that they are usually just named after an aspect of their appearance, like my cat with a white tail is called, oddly enough, white tail.

We have a man  living opposite us who is a gallero. Every night he would sit on a plastic chair with his cock on his lap, stroking it and talking to it. He would have a constant stream of visitors coming to see him and the cock.  Last week at around 11pm one of my cats brought in a cock’s head. It was the head of the cockerel from over the road. Panic ensued as my husband and I looked around in the dark for the body. He said we could stick the head on with taypee and put it by the side of the road and the owner would think it had been run over by a motorcycle. I knew better than to ask where the owner would think the taypee had come from. Anyway no sign of cock, and I was in panic mode thinking of the potential retribution for murdering his cock. However number two step son mentioned later that the cock had had its first fight and lost and had been killed.  In true cockfighting tradition his owner had brought him home and eaten him, apart from the head, which he had thrown away. The cat was simply helping himself to the rubbish. Phew – thank goodness for that. 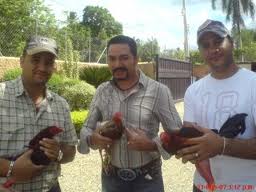 Where I live now, you cannot walk for more than 10 minutes without bumping into men with their cockerels under their arms, or sitting on a plastic chair with their cock on their lap and a bottle of beer in their hand. They take their cockerels everywhere, to the colmado, to the bank or just to visit friends.

Email ThisBlogThis!Share to TwitterShare to FacebookShare to Pinterest
Labels: A-Z of the Dominican Republic, Cats and dogs and other animals, Dominican culture