I is for Iglesia

The next installment in the A-Z of the Dominican Republic - I for Iglesia which means church in Spanish. The Dominican Republic is a Catholic country in that Catholicism is the official religion, however, according to the Constitution of the country it is not a state religion. The Catholic church does however have special privileges in that they can use public funds to underwrite some church expenses and they have exoneration from all customs duties.  Almost all of the guidebooks say that 95% of the population are Catholic which always seemed high to me, and according to research carried out by Gallup in 2006 the figure then was 40% practising Catholics, 30% non practising, 20% Protestant and 10% no religion.  The growing segment appears to be Protestant with hundred of little churches of all types - Evangelical, Methodist, Adventist - plus those run by overseas missionary groups such as Jehovah's Witness and Mormons. There are also other religions such as Jewish and Muslim and the Haitian influence has also meant that in most areas there is a local voodoo branch, or the Dominican version known as brujeria, but it is usual to go to church and also go to the brujo at the same time - as a sort of back up really.

On Sundays here in the barrio I can hear singing and shouting and clapping from around eight churches, and that is just those I can hear from my house. God is invoked in most conversations. When you say goodbye to someone they say, "Go with God," when you ask the butcher if he will have pork chops tomorrow he says, "If God wishes it".
Everyone appears to believe in God and if I have ever tried to discuss Darwin's evolution theory I have been totally shot down in flames and retold the story of Adam and Eve.


Looking then at churches, the two most impressive here are both Catholic. The first is the Catedral de Santa Maria la Menor, and was the  first Cathedral to be built in the Americas.  It is in the old Colonial Zone in the capital Santo Domingo and was started in 1512 and finished in 1540. The remains of Christopher Columbus were there until they were moved to a lighthouse built further along the coast.

The second famous cathedral is called the Sanctuary of the Miraculous Virgen of Altagracia in the City of Higuey. Higuey is in the East of the country and the name actually means sunlight in the languages of the indigenous Taino Indians, probably as the sun would rise there first. This cathedral was opened in 1971on the original site of a  sanctuary housing a  painting of an image of the Virgin brought here by the Spanish in the 1500's. The cathedral is noted for its designs of oranges as apparently the Virgin appeared in a local orange grove and many susbsequent miracles have happened in the area. The Virgin of Altagracia is the Patron Saint of the country, and one out of twelve Dominican women are called Altagracia. Every year on 21st January - Altagracia Day - thousands of Dominicans flock to the cathedral to pray to the picture of the Virgin, which is in a frame made of Dominican gold and studded with precious stones.
When I was shot several Dominicans went there from all over the country to ask the Virgin to help me, and then insisted I returned to thank her for my return to health. Which I did. 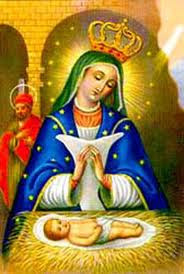