Yesterday I decided to cook a stew for dinner. It is my version of Irish stew but using the ingredients I can get here. So it is made of beef, potatoes, carrots, aubergines, tayota, yuca, pumpkin, Dominican wine, a Maggi stock cube and tomato paste with fresh thyme and cilantro. Unfortunately no dumplings as  I can't find suet here. Anyway, I put it in the oven at 5pm as you have to cook the beef for 3 hours to make it tender. All was going well until I went to check on it at 7pm and the gas had run out. We have gas in tanks which you take to a station to fill up. And the only time it runs out is when you are cooking - understandably I suppose, but mine always seems to run out in the evening when the gas station is shut.  It never seems to last long anyway, and that is either because the gas station does not put in the amount you pay for, the meter showing how much is being put in the tank is dodgy, the motoconcho man who takes it does not put an amount equal to the money you have given him, or there is a leak somewhere. I can't find any leak.

Well it ran out and the stew was half cooked and stone cold. Luckily we have a little barbecue so number two stepson was speedily dispatched to buy charcoal, which he did. Then the second problem was trying to get the damn thing to light, as we had no firelighters. However, I was not worried as I know how inventive Dominicans can be. 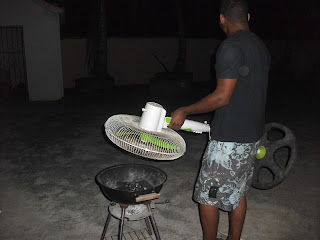 We managed to get it going and we all blew on the tiny little flame to try and get the rest of the charcoal to catch. Then number one stepson said he had a better idea and brought the fan outside which he said would save us blowing.  Good idea but it didn't work. 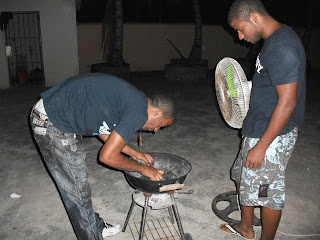 Next plan was to look for some plastic - apparently plastic cups are the best, but we had none. Tried a plastic bag but it just made a mess. Number two stepson went to neighbour and came back with plastic cup. 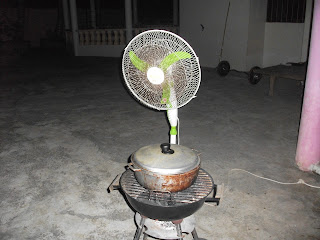 Success, it worked straight away and then we just had to wait for the charcoal to really glow then on went the stew. 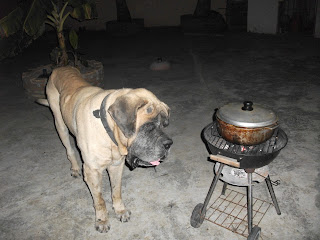 Once the stew went on the fire  the dogs became very interested. I was terrified that Silly Boy (blind rescued English Mastiff) would walk into it as he usually does when it isn't lit. Although he is totally blind he manages to know where the walls are but always walks into things in the middle of the garden. Hence his name as we are always saying, "You silly boy!" He got close but luckily the heat must have put him off. 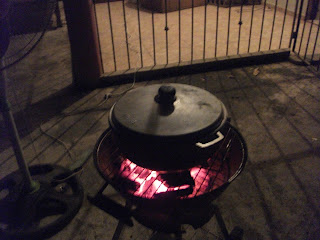 Once the fire was really going you could hear the bubbling from far and wide - so much for slow cooking the beef, and the smell wafted through the streets of the barrio. 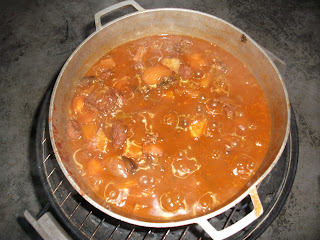 At last at nearly 10pm dinner was ready, and delicious it was too. What a performance though but it has happened before and no doubt will happen again next time the gas goes.
Posted by Lindsay at 12:59 PM