A month or so ago Chivirico and I were talking about Christmas and I mentioned Santa Claus and asked if he knew who he was. He said he did, but that he had never visited him as he, Chivirico must have always been naughty and he knew Santa Claus didn't visit naughty children.

I told him that Santa didn't visit me here last year either as he ran out of petrol, so it wasn't just him, but that I thought he might come this year. I told him to write his list and then we would barbecue it so that the smoke went up into the air and would float to the North Pole. 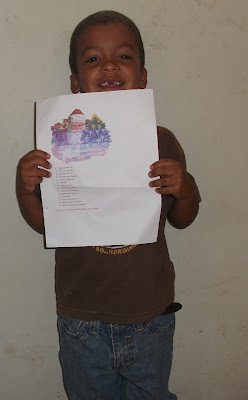 The list includes all sorts of Ben 10 things such as a Ben 10 watch, tee shirt, shoes plus presents for his grandparents and his brother and sister, and cousin and also food for the family at Christmas.
Once the list was ready, we went out into the garden and burned it on the barbecue, all of the time watching with a concerned face to make sure the smoke was heading in the right direction. 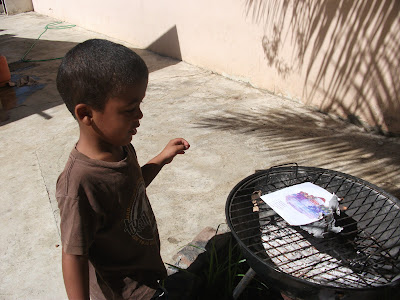 This was followed by him asking every day whether Santa had received his list, so I decided to try and find if there was some way Santa could communicate with him. I discovered a site which does a video from Santa, and you just provide some information and then Santa sends a video. Unfortunately Santa didn't have the name Chivirico in his list of names - odd that - but he did have Yuri and given his real name is Eury, I though they sounded close enough. The video done, I called him to say I had a message on my computer from Santa. You can watch it here. The level of excitement and wonderment was amazing. I have never seen a child so happy. The only problem is that he is used to talking to people on Skype, and Santa wouldn't shut up and let him speak back to him. So Santa says "Hello Yuri," and Chivirico wants to say "Hello Santa" back, but Santa won't stop talking. We have to watch this video at least twice a day, and every time he is desperate for Santa to shut up. He can now recite the whole video in English.

So we are waiting impatiently for Christmas, and I am getting ready to hit the toy shops, due to some very generous donations from people on his Facebook page - Chivirico the bodyguard. He has also decided he wants a tree for his house, so yesterday we cooked yuca fritters from Aunt Clara's Dominican cookbook, which were absolutely delicious, and he went off and sold them for the tree fund. You can see the recipe here.


All of them sold within minutes so apparently we have to make more tomorrow. 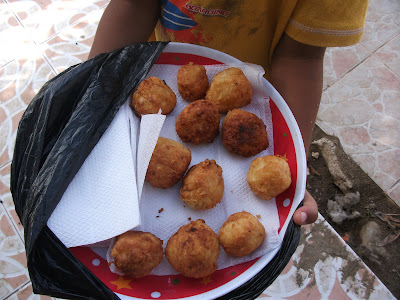 In the meantime he carries on with working as a bodyguard and washing up to try and earn more money for his Gatorade pot. 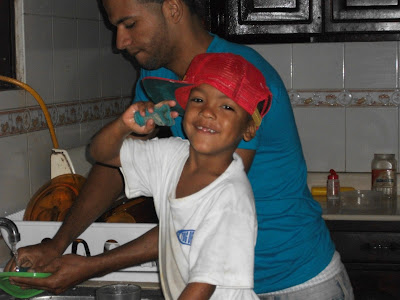