When is it time to leave?

For this months article for Expat Focus I wrote about those expats who decide it is time to leave their adopted home and return back to their homeland. You can read the full article here.

Over the decade or so I have been in the Dominican Republic, I have seen many expats leave for a whole variety of reasons. Some because their work placement had finished, many as their relationships broke up - either with a Dominican, or having arrived as an expat couple, one discovered the carnal delights of one particular Dominican and their original partner returned home, the tropical dream coming to an abrupt end.

Many leave due to ill health, being able to receive better and significantly cheaper treatment in the home country, and amongst the older expats, many just miss their children and grandchildren too much and return home to be closer to them, or don't want their own children to be brought up and educated here.

Many leave the DR as they quite simply run out of money, as this country has a way of sucking up money better than any other place I know, and high paid jobs are almost impossible to find.

And many leave as they just get fed up of the reality of living here. Fed up with the lack of electricity, the corruption, the legal system, and general day to day life.

What is interesting, is if you talk to a group of expats, many wax lyrical about the benefits of their home countries and the downsides of living in the Dominican Republic. However, some of my expat friends have returned home to the UK for the Christmas holidays, and listening to them describe their daily lives back there during the holidays makes me realise that for all the downsides of living here - and there are many - there is nowhere else in the world I would rather be.

Having said that, when I see the pictures of my the village where my mum lives in the snow, quintessentially English, and where I would be for Christmas if I were not here, I feel a tremendous tugging at the heart strings and smile nostalgically  at the memories of all the times I was there for Christmas. I do miss my family, miss the countryside and miss the food. But I don't miss the cold.  Truly beautiful, but truly cold. 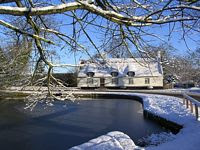 Imagine being cold. Really cold and damp. At the moment it gets down to 20 degrees Centigrade at night, 68 Fahrenheit and I find that cold. Those who left for Christmas are saying they had forgotten how cold it was in the UK. 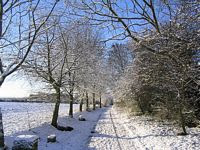 Imagine having to get out of your car and fill it up with petrol yourself. Whereas here we sit there, and the petrol man does it with a smile on his face, just making sure you check the dial is set at zero before he starts. Of course the chances are you get short changed somewhere along the line, but at least you don't have to get out in the cold and the rain.

Imagine not having avocados delivered to your home everyday.

Imagine having to take your groceries to the car yourself after you have been to the supermarket. Here a nice young chap packs them all up properly for you, takes them to the car and stacks them neatly inside.

Imagine not seeing your neighbour's washing hanging on the outside of your gate as I saw yesterday. 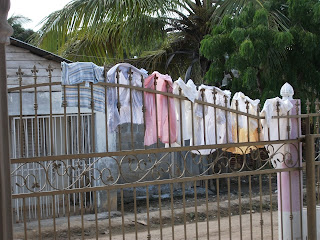 Imagine not hearing things every day that make you howl with laughter. Yesterday I was chatting to a lady who has been with her common law husband for 40 years. I asked her if he had been unfaithful. She said of course he had and had two other children with different women. I then asked him why. He said that he loved his 'wife' so much he didn't want to put her through the pain of childbirth any more so had children with other women instead. I would miss stories like that.

So, I think I will stay here until they carry me out in a box, as, however tough is it at times, I couldn't imagine feeling happier anywhere else.