Lala is my best friend here in the barrio. She lives next door and is around 80 she thinks. Every morning, at around 6 am, she wanders past my house in her nightie to go to the colmado to get a little packet of coffee. If she doesn't have the money for coffee she stops at my gate and yells and hands out her mug and I go and get her a mug of coffee from my coffee maker, with 4 sugars. She complains if it doesn't have enough sugar.

Lala is diabetic. Insulin controlled and she has a cracked mug with the syringe in it and the insulin in a little bottle. Her husband gives her the injections every day. She isn't sure how much she should have and nor is he. She has a cataract in one eye, so cannot see out of it, but the other one was operated on by an American team of doctors who came here a few years ago. She is waiting for them to return to do the other eye.

Every time I go to the colmado to get food for lunch, around 10 am she yells at me. "Fideito entray," in her strong local accent. She calls me little noodle as I am thin. We sit and chat and howl with laughter at each other's lives. She had 16 children I think although 3 died in adulthood. One recently paid for a bathroom for her, so she is over the moon that she has a real toilet to sit on. She gives me cabbage her son brings for her. I buy her Gatorade as she loves it. 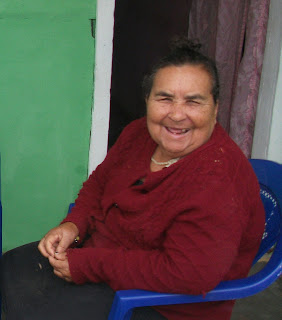 Last week Lala had a stroke. She was taken to the clinic and then transferred to the public hospital in Santiago. Every day I would ask her husband and her daughter how she was. Her husband said he had spoken to the doctors who said it could go two ways. She would get better or she would get worse.

Last night I heard screaming from next door and suddenly the whole street was full of people running to Lala's house. I assumed she had died, and sent my husband round to check. She had not died, but the doctors said she was brain dead and were sending her home to die. With no medications, no district nurses, no help, with nothing.

I went to see Lala this morning. The house was full. All her children who have not bothered to come and see her for years have all turned up with their families. She has a feeding tube so she will not die of starvation. She is totally still and cannot move nor speak. I explained to the family that if she was brain dead she would not be able to breathe. They told me you use your lungs to breathe and not your brain. Whatever. I held her hand and spoke to her. She opened her eyes and squeezed my hand. Well, I think she squeezed it.  Lala is still there, somewhere. Somehow, without medical help we have to work to get her back.

No idea how we will do it, but I will go and see her every day on the way to the colmado, even though she doesn't shout at me to go and see her. I will read to her, try and make her laugh as she always did. Tell her stories about England and what life is like in other countries.

If it doesn't work, she has the dignity of dying in her own home, surrounded by people who love her. I just wish there was some way we could have some help from people who know what they are doing for stroke patients, and how to nurse them at home. If anyone knows what I should be doing please let me know. I really want her back as I miss her terribly.
Posted by Lindsay at 4:49 PM