Another fun week in the campo

It has been a busy couple of weeks here in the campo. The water diviner didn't turn up so we are no further forward with the well, but we have had lots of rain so at least the garden is happy. The only problem is that when it rains - it rains hard and the house fills with water. It comes in through the patio doors, under the front door and when the balcony fills with water upstairs, it then cascades down the stairs. Every late afternoon the storms have arrived which has involved 3 hours of mopping. Hey ho. And the storms have brought the mosquitos with them, the first time I have seen them here. They have arrived in droves, but the campo folk have a range of different ways of stopping them biting. I have been told to rub my skin with garlic and vanilla (doesn't work) and Hector has been wandering around with half a neem tree around his neck, which he won't take off even at dinner time. 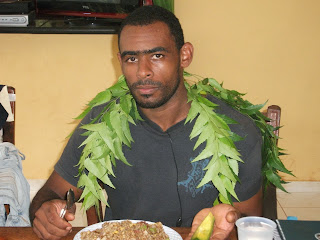 Chvirico came for the weekend and we harvested our first yuca of the season. It was absolutely delicious with none of the stringy bits that yuca sometimes has. As we have maybe 50 yuca plants there should be enough to keep us going for a while. 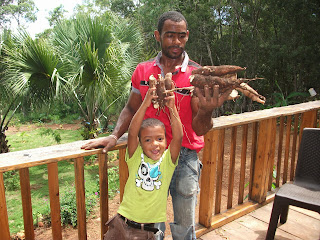 We went for a walk with the dogs to see the pigs. Everyone in the campo has pigs but they don't keep them close to the house, they are all further away deep in the woods. 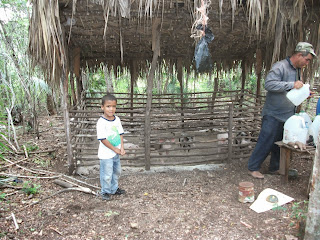 And we also cooked cup cakes - I love the way Chivirico climbs onto the work surface to supposedly wash his hands and instead is caught out licking the bowl. 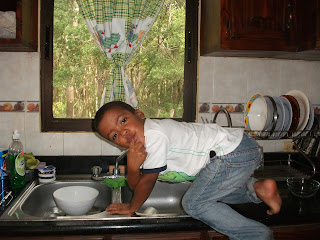 Talking about being caught out eating out of the bowls in the sink, I spotted our Great Dane Belinda doing exactly the same thing. 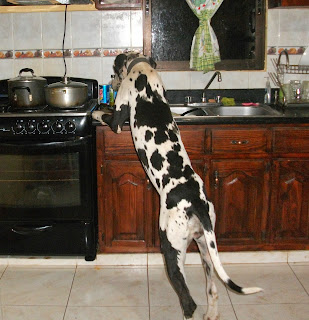 Remember the cat who had a kitten and took it off to live in a deserted house nearby and then brought it back and I had to put it in the washing machine? I gave the kitten to a neighbour, but it ran off and went back to live in the deserted house. Eventually I found him again, and given that it was his Dad who was shot for playing with chickens I decided to keep him. His name is Bubblito - son of Bubbly, and here he is happily playing in out Dominican cat flap. 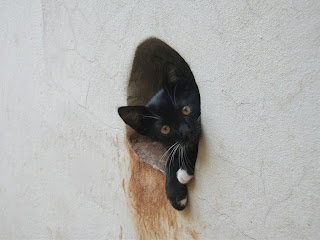 And talking of cats, my three pawed cat Cojo who didn't make the move here and who was eventually found and arrived three months later has settled in well. He sleeps on top of the balcony railing which is a pretty stupid thing for a three pawed cat to do as he falls off periodically. He then looks around to see if anyone has spotted him falling off and then nonchalantly climbs back onto his perch again. 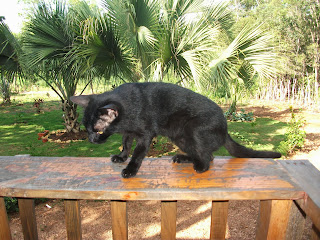 
Guaranteed to make me smile over my morning coffee.
Posted by Lindsay at 11:46 AM