My book was published by Summertime Publishing which specializes in books by expats and about the issues facing expats, whether the effect on the families, the kids, being an expat wife or a memoir about living abroad like mine. We read each others’ books and review them and so I have been exposed to books which I would never usually read.

For example, I read Perking the Pansies by Jack Scott - a tale of two gay men in Turkey. A fabulously witty, funny and insightful book about Turkey and the adventures of Jack and Liam. What was interesting is even though Turkey is not the DR, the issues facing expats are often similar.


Another book I really enjoyed was Expat Life, Slice by Slice by Apple Gidley. It is a story of her life and childhood moving around the world and as well as superb writing which brings the places to life, it looks at all sorts of issues which affect expats such as child rearing in foreign countries, making friends, dealing with elderly relatives at home and relationship management.

Reading all these different books has got me thinking as to how people change and cope when they spend a long time in a foreign country. I am English and always will be although I have lived in the DR for 12 years on November 2nd! I am married to a Dominican, have Dominican step kids, live in a purely Dominican campo and only speak English to my mother on Skype and if I ever have English speaking visitors. But I will never be Dominican. I will always speak Spanish with an English accent, and I don’t think I will ever act or think like a Dominican. But having said that I could not imagine living in England again. Not being able to pop into anyone’s house without letting them know I was coming; not having people calling round at all times of the day or night with an avocado, plate of food or cup of coffee; not listening to music everywhere you go; not laughing most of the day.

That is not to say I will not change the way I do some things. I used to be conscious of being on time, time was important to me. Now it is not. The Dominican way is to be late and unless I am meeting a fellow Brit I will not panic if I am late. If people are coming for dinner I never expect them to arrive on time and plan accordingly. I remember once we had dinner at home and I was just going to bed when my husband exclaimed that he had forgotten we had been invited to dinner in Santo Domingo, an hour away. I had to get out of my pyjamas, get in the car and we arrived at 11.30 at night for dinner – the second dinner of the night. Everyone else was there and they were all starving, waiting for us to arrive.

But in many ways I will always be English. I will cook English food; cut off a piece of cheese if I want to eat it, unlike this piece I found in the fridge a couple of days ago. I don't need forensic analysis to recognise those teeth marks, and they don't belong to a mouse. 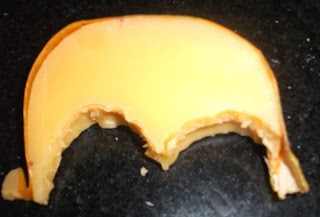 People born in one culture, growing up in one culture and then moving to another face special and often rewarding challenges and even more so the children. They call them TCKs – Third Culture Kids. I receive many emails from people every day about this blog, or my book, and I recently received one from a film producer, Rahul Gandotra who had made a short film about this very issue. It wasn't just any old film, it was actually shortlisted for an Academy Award. He sent me a link to watch the film for free.

It is an extraordinary film, beautifully shot in the foothills of the Himalayas and follows the story of a young British boy of Indian parents sent to boarding school in India. It explores this very issue of being born into one culture whilst genetically from another. He has given me permission to share the film, and you can download it here, together with interviews and discussions from experts on Third Culture Kids. I hope you enjoy it as much as I did.