In 2003, the Dominican Republic had a severe recession, with a subsequent rise in unemployment and 1.5 million were living in poverty.  The government wanted to help the poorer people with basic foodstuffs but it became increasingly difficult to get them to them, was a chaotic process with people mobbing the trucks carrying the food, and those who ended up with the food were not necessary those in most need.
In 2004, the Social Subsidies Administration decided to shift from physically delivering food and other aid, to providing those in need with plastic cards which could then be charged up by the government and so the Solidarity card was born.

They started as an experiment with 5,000 families and 6 million pesos and today there are nearly 900,000 card holders and as at the end of July this year, 40 billion pesos had been put on the cards which is around a billion dollars.

The cards are charged up with money centrally on the 10th of the month, and the amount per card varies from 700 pesos to nearly RD$5,000 - around US$125.  The average for the whole country is RD$3,733 per month although it does vary quite a lot by province with the average in Monte Plata being over RD$5,000 and La Romana province only just over RD$2,000.  The cards can be used in specific colmados to pay for basic foodstuffs  (no cigarettes or alchohol!), to pay for schooling, cooking gas, electricity and medicines. 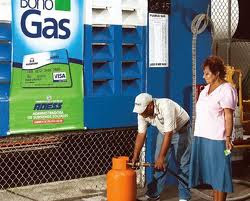 The colmados simply swipe the cards and then are paid back within 3 or 4 days. People tend to buy rice, oil, powdered milk, beans, stock cubes, flour and sugar.  The idea works as it is a means of helping the poorer people, but with dignity, rather than handing out food from the back of a truck, and also helps the local colmado and local employment - my local colmado always pays for additional staff when the card money arrives. The people who receive cards are identified by an specific organisation and the card is non transferable. In addition, different people are in receipt of different programmes and benefits.

It is said by some that it is not just the poorest people who get the card, but that it is used as a form of political patronage, and it is talked about a lot at election time, with each side promising to give more cards out and saying they know the opposition will cancel them.


Nonetheless it seems to work well, the only problem is there is no way you can go to the colmado on the day the money arrives as it is heaving, and the days after there is nothing on the shelves!