The roads in the Dominican Republic vary from fabulous to appalling, with most somewhere in the middle.

There are major motorways across the country, with two or three lanes as good as any you would find in Europe. Most of them have tolls, varying from around 80 cents up to US$10.

In between there are standard single lane asphalt roads with potholes in several areas and you have to watch out for cows, chickens, dogs and goats which often appear out of nowhere.
.
Once you leave the main routes then the roads become compacted dirt tracks, some of which are very badly rutted with enormous holes. 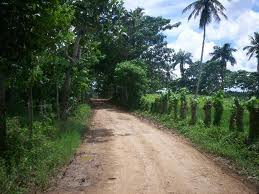 In the barrios in the towns most of the roads are dirt. Very dusty when there has been no rain and very muddy after the rain. They usually have gutters down the side, as all waste water from the showers and washing machines flows out into the street.

This morning they decided to improve my street. I am not sure whether they are going to put gravel down or what, but they started a week ago on the street one down from us, dumped a big pile of dirt so that no one can get past and then disappeared. 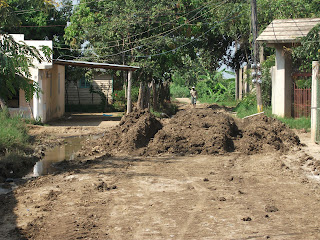 This massive yellow bulldozer came at 7 am and made a few passes. It has now disappeared leaving in its wake broken pipes and floods of water. 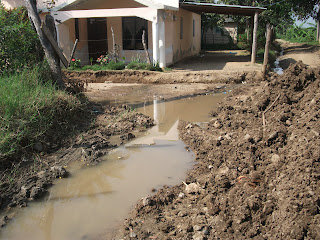 It has not returned. Where the water is really deep, intelligent people have put palm leaves in so that you don’t fall in. Given that half of the time there is no power so the streets are pitch black at night, I am not convinced that the palm leaves will glow in the dark, so now if you go out at night there is a good chance you will end up swimming. 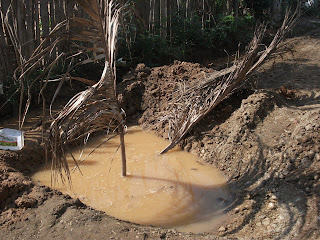 At a time when we are being told not to leave standing water because of dengue and there are cholera outbreaks this seems totally crazy. On the one hand we have local council inspectors coming round to make sure we have no containers with standing water outside, and then the same local council comes and breaks all the pipes leaving the roads full of standing water, and what is more there is no water coming into the house as they have broken the pipes. This means we have to go and get water in containers.
Dominican logic!