At last Chivirico’s Gatorade pot reached the magic number of RD$500 which is about US$12 and off we went to the bank. I had thought long and hard about who should be the custodian of his account. If  it were me, we would be sure no money would be taken out, but on the other hand I doubt I will be living here for ever, and then how would he get money out, and I didn't want the family to think I didn't trust them. 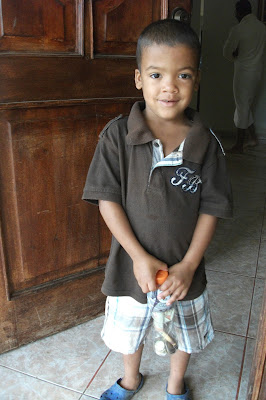 His grandmother had taken RD$250 out of the pot to buy flip flops he told me. The reason we made it to RD$500 was because she brought the money back. She said she had just borrowed it, so that made me feel more confident. In the end, we decided the account manager should be his aunt. She is called Ana and is training to be a teacher, and is engaged to my step son Alberto.


We were in the middle of the passing of Hurricane Sandy so when the rain stopped for a short while, together the three of us squelched our way through the muddy streets to the bank with Chivirico clutching his Gatorade pot. After a long wait we sat down to open the account. He could barely contain his excitement. As usual it took ages with all the paper work but at last it was done, and he walked out holding his account book with pride. 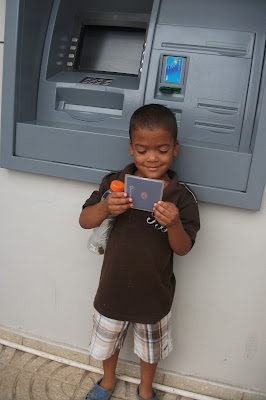 He has already started saving in his pot again, up to RD$18 so far, and some very kind people have sent money into his account. He understands that the money is being saved for his future and his education and that he shouldn't think of taking any out for a long time. The big decision now is what he will buy with the money when he has saved up enough. At the moment he can’t decide between a new cooker for me, so that I don’t burn the cakes again, or a motorbike. No doubt by the time he reaches that figure he will have changed his mind a million times more.