As you know Chivirico is working to fill up his Gatorade bottle in order to have 500 pesos (around US$12) so that he can open a bank account. He has been doing all sorts of jobs such as washing the car, cleaning the yard and feeding the animals to try and fill it up. He has collected bottles as well to sell to the empty bottle man who pays 1 peso each, although he hasn't been seen for a while.  By last Saturday it only had 100 pesos - it seems to go up and down. I am not sure if he is raiding it, or members of his family are. Anyway, he was desperate to earn some more, and watching the people in the street who are always selling things, he wanted to find something to sell.


I suggested we bake some cakes and biscuits then he could sell them. He loved the idea and so on Sunday he was here at 7am (so much for my lie in) and off we went to the colmado to buy the ingredients.  I decided to use my own recipe book, one I wrote myself when I was aged 8 till around 13 I think, as I knew the recipes in there would work. Well I hoped they would. 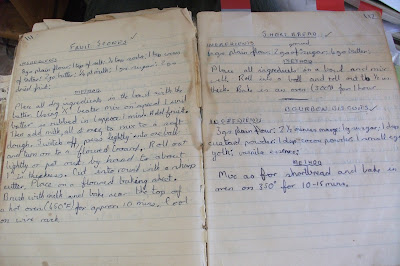 We were a bit limited for choice, as no chocolate to melt here, no golden syrup, no nuts, so we decided to make shortbread and chocolate brownies.

Once home he started work. I supervised from a safe distance as there was a tendency for the ingredients to fly all over the place. The shortbread was easy, but was hard to roll it out as I don't have a rolling bin - we used a bottle of rum instead. 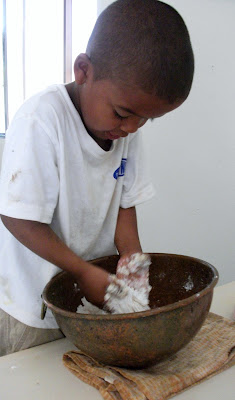 Once the shortbread was in the oven we moved on to the brownies. A little more difficult as you have to beat the eggs and sugar, and the sugar was not soft brown sugar as specified, but natural cane sugar. More ended up on the floor than staying in the bowl. 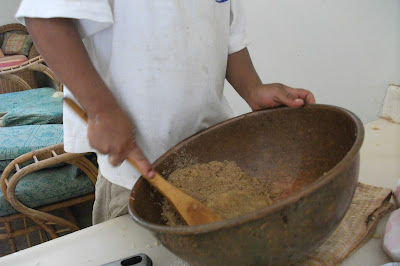 Eventually the butter and sugar was sort of there and Chivirico broke the eggs in. I pulled all the bits of shell out, we added flour and cocoa and then he almost neatly put the mixture into the tin and into the oven. 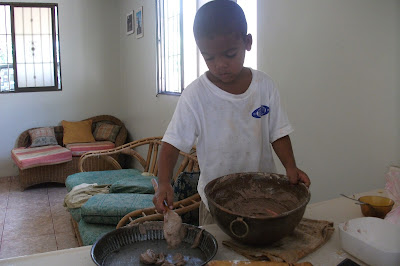 I must say I was a tad concerned as my oven has no temperature control. It has a knob. You can put it to minimum knob, half knob or full knob. Full knob is very dangerous as  the oven sounds like it is about to take off. We put it at minimum knob and prayed. Chivirico then what every kid loves doing and licked the bowl. 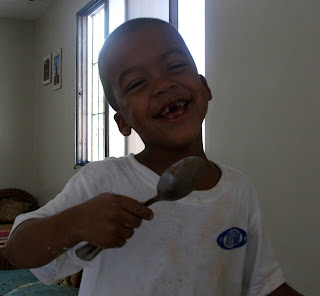 In the meantime Chivirico prepared the tray, told me we needed lots of serviettes so that each person would have a serviette for their biscuit or cake and he practised putting the tray on his head and walking up and down shouting what he had to sell. 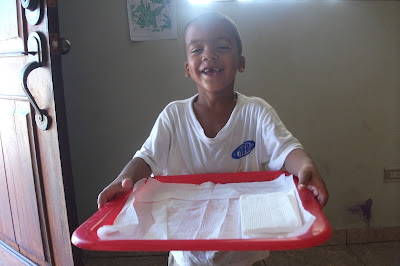 After checking the clock every minute and sitting sniffing the oven at last they were ready. I must admit I was impressed. The shortbread was fabulous and the brownies, although they didn't rise at all, were chewy and sort of crispy with not using soft sugar. They tasted lovely although a bit sweet which I knew wouldn't worry Dominicans. 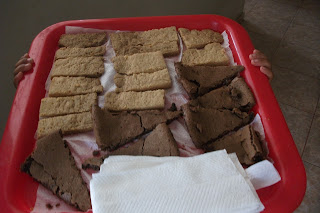 We discussed pricing strategy and decided on 5 pesos each and off he went, yelling, "Biscuits and cakes only 5 pesos each. Two for ten pesos!" 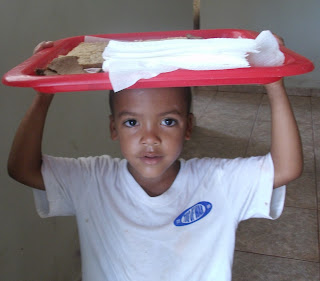 Within 10 minutes he was back. All sold. Grand total of 125 pesos which went straight in the pot. He decided we had to do it again the next day. I persuaded him to wait a week, so Sunday we are baking again! At this rate he will be a millionaire.
Posted by Lindsay at 5:35 PM