Chivirico came to the bank with me a couple of weeks ago and was totally fascinated by the ATM machine. The fact that I put my card in, and money came out astounded him. He stood there watching wide eyed as more people used the machine, and from that moment all he wanted was a bank card so that he too could go and use the machine.

I explained to him that you have to have an account with the bank, with money in it, in order to be able to take money out of the machine. That was it. His sole purpose became earning money to open a bank account.  He has washed the car (well the bottom half of it); 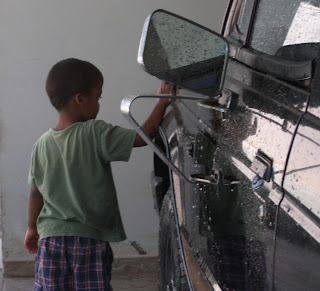 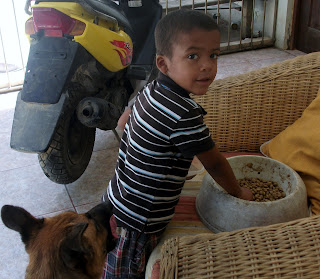 Each time he gets paid a few pesos, but straight away goes to the colmado to spend them on a biscuit or sweets. I explained to him that if he spent all his money as soon as he had it, he would never have any to put in the bank. His reply was that he was hungry and it was more important to eat than put money in the bank and he could only save money if he wasn't hungry.

The discussion continued over a game of dominoes and I said that if he had 10 pesos he should spend 5 pesos on a biscuit and then save 5 for the bank. That appeared to be a satisfactory solution, and within a few days he had 15 pesos saved and we were prepared to go to the bank the next day to see about opening an account. He was beside himself with excitement. 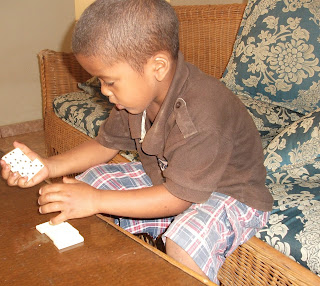 The next morning arrived and once school was over Chivirico came to the house and announced he could not go to the bank as his father had come to the house and taken 10 of his 15 pesos to give to his brother and sister. His father had told him it was very important to share. This of course is true, especially in this country, and I remembered being in hospital when I was 5 to have my tonsils out and my grandmother sent me a box of chocolate teddy bears. The nurses told me it was important to share them with all of the children on the ward, with only one for me. I remember being heartbroken and furious at having to share my chocolate teddy bears so it was interesting to see that Chivirico just accepted that it was the right thing to do share his hard earned cash with his siblings, although  it meant that going to the bank was on hold until he could earn some more money.

The next day he earned some more, so off we went to the bank with 11 pesos. 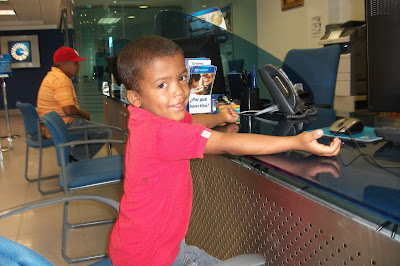 We arrived there during lunch hour and so the bank was nearly empty. Chivirico sat down and put his 11 pesos on the counter and announced he would like to open an account. Unfortunately the children's accounts need a minimum of 500 pesos to open them, and he would not be able to have a card to take money out of the machine, it comes with a savings book.  The account must be opened by an adult and it is that adult who can take the money out, although Chivirico can pay it in. In order to open the account he just needs an adult to do it, a copy of his birth certificate – and 500 pesos.  He went into great detail at the bank about how he was earning money, and that it was best not to spend it all on sweets, concluding by saying he needed the money to buy a Jeep.  All of the bank staff were in total hysterics. 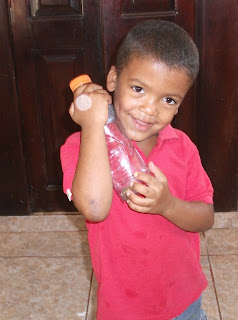 Although disappointed, he was not defeated. We got home and he made a money box out of a Gatorade bottle, and I have told him when it is full then we can go back to the bank and open his account. We just need to decide who the responsible adult will be!  The money in the bottle appears to be going up and down,  although it is counted several times a day. I think it is probably being raided for sweets and biscuits at the colmado.

One day he will have his bank account. In the meantime, if you want to keep up with his activities on a regular basis,  he now has his own Facebook page, set up by one of his fans - Chivirico the Body Guard.
Posted by Lindsay at 12:04 PM