What is it with the tyres in the Dominican Republic? I drove thousands of miles in the UK and never had a puncture. Here I have at least one a month. In the last 3 months I have had 3. This is one I had a few days ago. 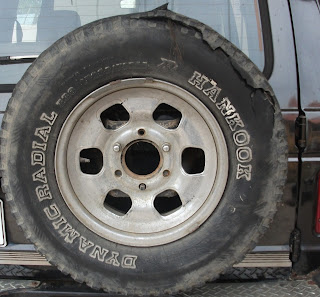 I don’t know if it is the roads, the tyres or what it is. Sometimes it is a nail, or a piece of barbed wire, but more often than not they just fall apart and shred into pieces. The roads are littered with bits of tyre all over the place. 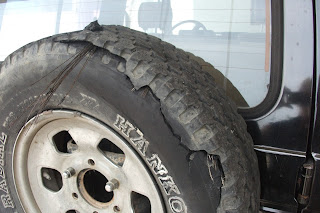 The good thing is that it is never a total disaster. There is a gomero or tyre man on every corner, sitting there waiting for business and they never have to wait long. They are also amazingly cheap. To change a shredded tyre for the spare costs between 20 and 50 pesos which is just over a dollar. If you need it mended that is up to 150 pesos or 4 dollars. To be honest I am not sure what they mend it with, sometimes it is a patch and sometimes something that looks suspiciously like cat gut which they shove into the hole. The patches don’t last long as the glue melts. The tyre man told me it was because the roads were hot. I pointed out to him that we live in the tropics so of course the roads were hot, and couldn't they make a glue which didn't melt? 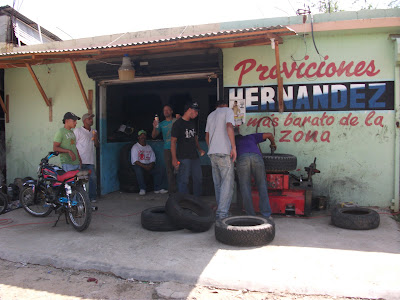 Also they have great machinery for taking the tyre off. Some have a proper machine, like the man above I used when I had a puncture driving to Dajabon, but most just use a machete like tool with a bendy bit at the end. 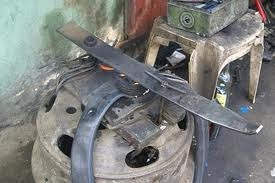 When you have a puncture there is always someone around to help you fix it, I just pay them a few pesos. They will even take the spare to be filled with air, as it is always flat. Dominicans seem to take punctures in their stride and not worry about them at all. It is a fact of life. They don’t actually say that the tyre has a puncture, they say it punctured itself – “se pinchao”. Apparently my latest puncture, or total shredding was because the tyre didn't work or “no sirve”. It was pretty obvious to me that it didn't work but I wanted to know why. Further investigation revealed that it was apparently too old. I had no idea tyres became "too old". Probably as they only last a few weeks here before they get a puncture.