A Dominican Hen House (Without the hens)

Firstly Happy New Year to you all!

Remember the Hen House Project? This is the picture I gave Danilo and all he had to do was build a Hen House which looked like this and then fill it with chickens who would lay eggs. Simple really. 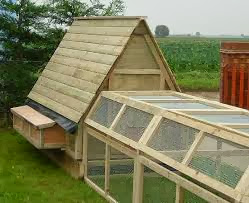 Well it will be no surprise to you that the Hen House bears only a little resemblance to this picture and there is no sign of the chickens.

Here is the completed Hen House 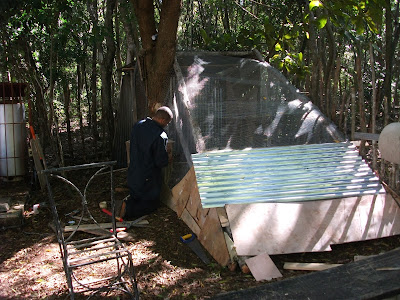 Now I wanted a nesting box so that I could just lift up a flap and take the eggs out. I do have that, but the flap isn't wooden, it is a sheet of zinc. Chivirico demonstrates how it works. I just hope they can't push it open and escape. 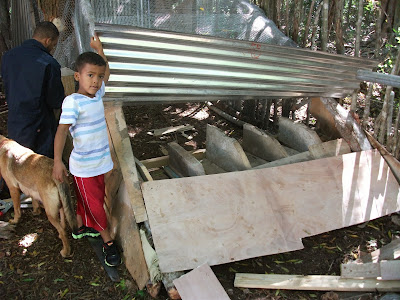 So that part should be easy enough. To get into the Hen House to feed them you have to go in through the back door - which is also a sheet of zinc. Damn clever stuff this zinc. 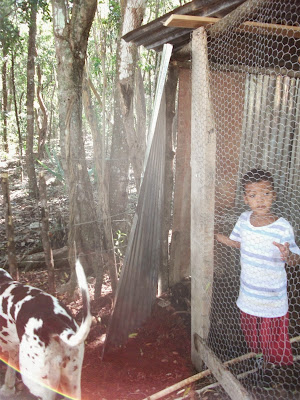 And of course there is a "piece de resistance". An additional nesting box. Remember my wardrobe which had a chunk carved out of it so that the television would fit? 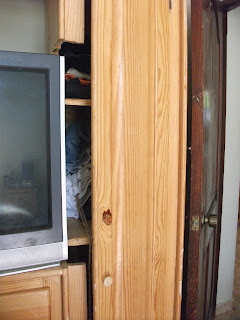 Well it has reappeared as an additional nesting box. 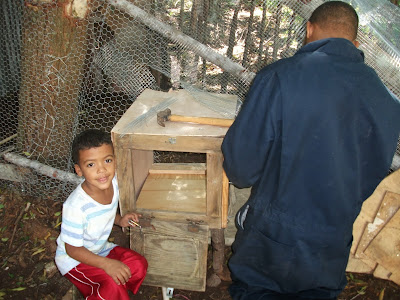 And for some unfathomable reason it has a padlock on it - when you can just lift up the zinc flap which has more nesting areas. Is the hen who goes into this box going to lay golden eggs? 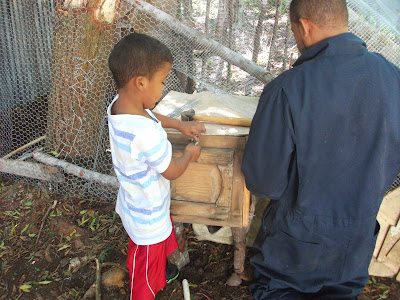 So the house is ready, the food has been bought, but there are no hens. Danilo went to the market to buy them and was told they had to come from Moca which has the best laying hens apparently. He ordered them, and went to pick them up a few days ago at the appointed time.  No sign of hens as they were on the way "en camino" and spent most of the day "en camino". Eventually they arrived. But they had not been vaccinated. I had no idea hens had to be vaccinated and I assumed against some sort of Chicken Flu. No. They have to be vaccinated against Smallpox and something called PIP which is when they breathe through their beaks rather than nose (no idea chickens had noses either) and their tongue goes hard and they can't eat. So he waited for the vet who never arrived - no chickens came home to their 5 star house. It was then arranged that someone who was coming here to visit would bring them - still didn't arrive as still not vaccinated. The latest news is that they will come tomorrow. We will see. I have no idea how big they are, or if they are already laying or what. This will be an interesting experience!
Posted by Lindsay at 5:29 PM

Email ThisBlogThis!Share to TwitterShare to FacebookShare to Pinterest
Labels: campo life, Cats and dogs and other animals, chivirico, Dominican workmanship