This is an excerpt from my column in Expat Focus this month.  You can read the full article here.

Out of the population of 10 million in the Dominican Republic, around 30% live in the country, in small settlements known as campos. Life in the campo is very different from life in the towns and cities, due to the lack of infrastructure and lack of work. Poverty is rife, but somehow the inhabitants of the campos survive,  and raise children who then often leave to find work in the towns and cities.

The houses in the campos are usually made of planks, sliced up palm trees, although the richer will build theirs out of concrete blocks. The poorest houses are made of twigs or sugar cane, woven together. The roofs are invariably zinc sheet. Inside the houses the floor will just be dirt, or concrete for those who can afford it. The number of rooms in the house, will again depend on how much money the occupants have. Those who can afford it have a bedroom separate from the living area, and some even have two bedrooms, one for the children.  Otherwise the children sleep in with the parents.

The living area may also have a kitchen at one end, but the majority has an outside kitchen or no kitchen at all. Cooking is usually done on a fogon, either made of cement like a table with an indent in it for the fire, or simply three concrete blocks on the floor with a space in the middle where you put either the wood or the charcoal.

One of the main problems in the campo is the water. In some areas the public water system delivers water in pipes, and a few people have a tap in the kitchen. More have a tap in the garden or maybe one in one garden which several people use. If there is no piped water to the community, then the alternatives are to dig a well, or to go to the river and conserve rainwater too. In some areas water is delivered in a truck – although most campo folk could not afford this.  In many campos, as the sun loses its heat in the late afternoon, you can see a steady stream of donkeys laden with plastic containers of all shapes and sizes, heading down to the river. 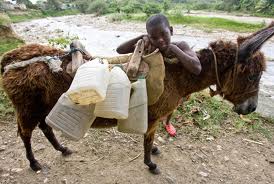