O is for the Ozama river

My A to Z of the Dominican Republic continues with O for Ozama.

The word Ozama is a Taino Indian word which was originally written Hosama or Osama meaning to listen, or attention, although I have no idea why one would call a river that. It is 148 kilometres long, beginning in the Loma Siete Cabezas, literally the Seven Heads Hill, which at 856 metres  is the highest point in the Sierra de Yamasa mountain range.

The river then flows eastwards through Monte Plata province and eventually meets the Caribbean sea, dissecting the capital of the country, Santo Domingo.  It has three main tributaries, the rivers Isabela, Sabita and Yabacao. 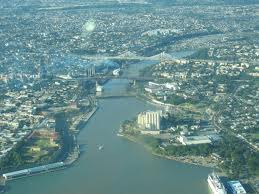 It is the 4th largest river in the Dominican Republic, and due to fact that its source is in an area high in rainfall, the water from the river is not needed for irrigation purposes and thus all flows down into the ocean. In addition, because the mouth of the river and its basin are actually below sea level, when the tide is in the sea water flows back up into the river. 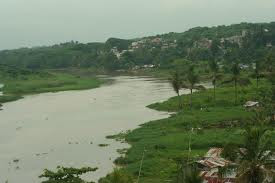 When the Dominican Republic was a Spanish colony, flat bed boats used to travel up the river, however it is not deep enough for ships, although they dock at its mouth. It has often been cited in poems and for many Dominicans, especially those living overseas, the Ozama river is a symbol of their homeland.

To be honest, although I have always wanted to travel into the interior of the country on one of the rivers, the Ozama would not be one I would choose. Most of the poor in that area of Santo Domingo live in the surroundings of the Ozama and Isabela rivers, in what can only be described as slums. 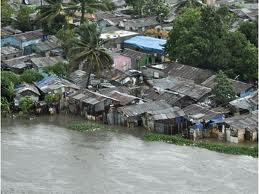 I have often wondered why people would want to live there. As recently as the 1950's there were hardly any houses there at all, and the entire north zone of the city contained only an estimated 5000 families. The last 30 years however have seen amazing changes and tens of thousands of families were evicted from their homes in various parts of Santo Domingo to make way for roads, hospitals, public monuments such as the Columbus Lighthouse, and tourist and business developments. In the 1980s, 70% of the population of Santo Domingo lived in working class barrios and shanty towns.  They were evicted and although some were rehoused, many had to just find somewhere to build a new home, hence the river banks became populated. 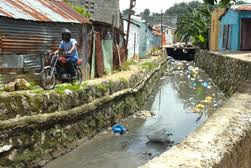 The pollution of the river is legendary, and it is not only due to people who live there who use the river for all of their waste, it is also due to industry. In the 1960s and 1970s the Dominican Republic became open to foreign investment, and 71% of the new industrial factories to arrive, set up in Santo Domingo. Obviously environmental pollution was not even thought about in the DR at this time, and they simply discharged their untreated waste into the Ozama and Isabela Rivers. 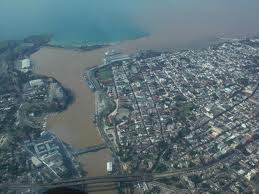 Those living in the area of the River Ozama live in appalling conditions. The houses often flood, there are mudslides, they are almost without potable water, no mains sewage, no rubbish collection  and vulnerable to cholera, typhoid and other water borne diseases. 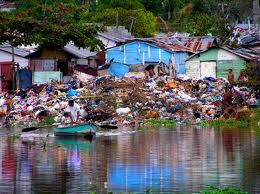 It is a crying shame that the River Ozama cannot be the focal point of the city as are so many other great rivers around the world - the Thames in London, the Seine in Paris, the Danube. It could be used for a tourist attraction. parks along the side for the residents of the capital, boat trip into the interior, and  fishing trips. 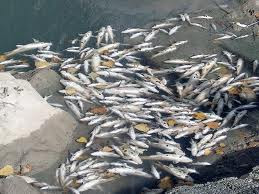 Instead it is the focal point for rubbish, pollution and poverty.
Posted by Lindsay at 12:33 PM

Email ThisBlogThis!Share to TwitterShare to FacebookShare to Pinterest
Labels: A-Z of the Dominican Republic, Barrio Life