L is for Luz

The next letter in my A-Z of the Dominican Republic has to be L for Luz. Luz means light, but  it means electricity too and the lack of reliable electricity is one of the worst parts of living here and doing business here.

According to the World Bank, the revitalisation of the Dominican economy depends greatly on a sound reform of the electricity sector, which is characterised by high operating costs, large losses due to theft by illegal connections, high tariffs to cover these inefficiencies and a low level of bill collections. The sector has been nationalised, then privatised, then back under government control and all to no avail.

Around 90% of the country has electricity, with a lower percentage in rural areas. The country is divided into different sectors, A-D, and the amount of electricity you receive depends on your sector. Those in A sectors should have 24 hours a day, whereas the 50% of the country in D sectors have around 12 hours a day. The outages are planned, and you can check them out on line, but as well as the scheduled times to be without electricity, it goes off at other times too, in the supposed 24 hour sectors as well. 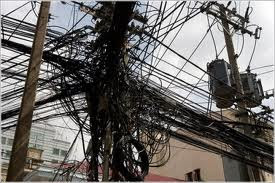 The reasons it goes off are manifold. One is that the wires are above ground and so often blow down, and the electricity is always turned off in a hurricane or tropical storm. Also it seems to be often turned off for maintenance, or so they say. If you live in a D sector it is due off at certain times of the day but it rarely goes off when the web site says it will,  or comes on when it is supposed to. I assume there is a  little man who has the job of  turning the different sectors on and off at specific times, but he often  forgets, or is eating his lunch or he falls asleep when he should turn it on. Sometimes he turns it on when it should be off and then realises a few minutes later and turns it back off again.

The vast majority of Dominicans are used to living in an environment where the power comes and goes and the days are peppered with hearing people shout: "Hay luz?" which means "Is there electricity?", or the happy shout of "llego la luz!" "The electricity arrived!" and the sad and frustrated call ,"Se fue la luz," "The electricity went." As soon as the cry goes up that the electricity has arrived, then on goes the music and out come the washing machines. 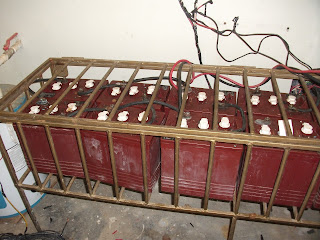 Living without electricity is not easy, however the majority of expats and businesses will have alternative sources of power such as diesel powered generators and inverters with banks of batteries, but these all add to the cost.  The electricity when it does arrive is already among the most expensive in Latin America and the Caribbean, and the more you use the more it costs. Where I live it is RD$4.44 per kilowatt for the first 200 kw and then jumps to RD$6.97 for the next level and continues to increase. Totally the reverse for the usual situation where the more you use the cheaper the price per unit. Those who live in houses with swimming pools, air conditioning, and washer dryers can often expect to pay over US$500 a month for electricity. 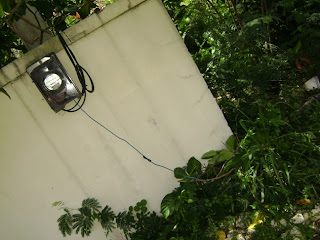 Because of the high cost, many people will try and find ways around paying for all of their power, and in 2007 the Central Electricity Board estimated that only 59% of the power they produced was paid for. Many people assume that those who connect illegally are the poorer people who simply take a piece of wire and some taypee and connect in whichever way they can. I used to have up to 20 or 30 small huts connecting into my meter, simply by using a piece of wire and then burying it under the ground between my house and theirs. I would disconnect them and they would simply reconnect the next day. It did not help that the electricity company insisted that the meter had to be on the outside wall, rather than inside so people could not connect to it.

However it is not just the poor who try and keep the costs down, There are several other methods people will use. The easiest way is to pay the man who reads the meter a small tip to become digitally dyslexic and read the meter wrongly - every month. Other methods include installing two meters to avoid using too many kilowatts on one meter, having the meter adjusted to go 'slowly', and wiring all or part of the house or business directly to the supply. However the electricity companies are always on the look out for these type of scams and fine the offenders heavily.

In the end the electricity situation here is what it is, and most people learn to work around it, but for those who do not know how it works nor the cost, it can be a shock when they first arrive.