Ñ is pronounced like the ni in onion or the ny in canyon. Ñame is thus pronounced ny-ah-may. 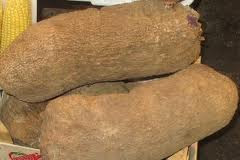 Ñame is a staple Dominican vegetable and the English translation is yam, but it is not a sweet potato as I think yams are. The word is also used to describe someone who is a bit of an idiot! It cannot be said to be an attractive vegetable by any stretch of the imagination being brown and woody looking, and comes in a variety of shapes and sizes. In fact, ñame can become enormous, well over 100lbs, and there are all sorts of reports of monster ñames - here is a chap who is very proud of his. 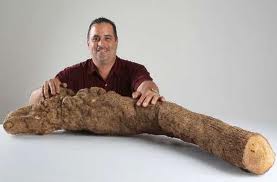 When you cut it open it is white inside and to cook it you simply peel, cut into chunks and boil until soft. 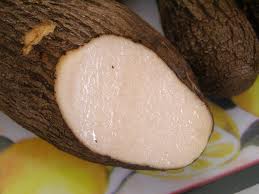 Ñame takes around 7-10 months to grow, and is often grown as an ornamental plant as well, due to the attractiveness of its leaves. 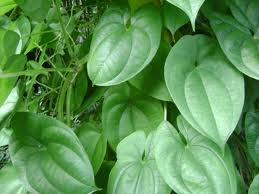 It is the staple diet in Africa, where 95% of all ñame is grown, and is used in a dish called fufu, which provides 200 calories a day per person. However, because it is low in protein, in areas of high consumption children often suffer from a serious protein deficiency disease. In addition, although not scientifically proved, it is thought to contain a type of oestrogen and so is used as a natural menopausal supplement to reduce hot flushes. 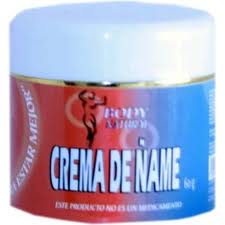 Although ñame can be simply boiled, it is used mostly in the Dominican Republic in the traditional dish known as sancocho, which literally means stew. I cook this by boiling beef in water with onions, garlic, lots of fresh coriander, salt and the proverbial maggi stock cube, for around 2 hours until it is very tender, then add root vegetables including lots of ñame, yautia, plantains for another hour. Sancocho is very popular at celebrations as it is easy to make loads. 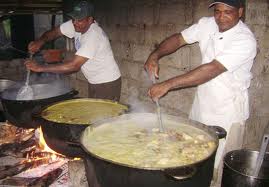 However, if you want to give it a try and make the authentic sancocho with seven types of meat, then check out the recipe here, from Aunt Clara's Dominican Cookbook.
Posted by Lindsay at 11:43 AM