M is for Mamajuana, Mangu and Morir Soñando

We have now reached letter M in my A to Z of the Dominican Republic and there are so many things starting with letter M it was hard to choose. In the end I have chosen three of my favourite things, all of which are quintessentially Dominican.

Mamajuana is what my husband calls in his interesting English, 'Rum with esticks'. It is basically rum, red wine and honey poured into a bottle which is full of bits of tree bark, twigs and herbs. The herbs and bark were originally used by the Taino Indians with hot water to make a medicinal tea, and this has now been replaced by alcohol.  Mamajuana is said to act as an aphrodisiac, in fact it is sometimes known as el para palo, literally 'lift the stick', a flu remedy, an aid to digestion and the circulation, a blood cleanser and a tonic for the liver and kidney.  It is usually served as a shot and often restaurants will give you one on the house after a meal. 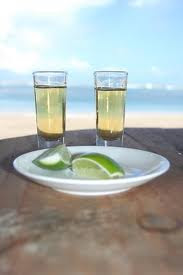 The name Mamajuana actually comes from the English word demi john - the name of the large bottle with a narrow neck, which is traditionally used for making it. Demi john comes from the french word for the same bottle, which are known there as Dame Jeanne. Instead of Lady Joan it has ended up as Mother Joan in Spanish. 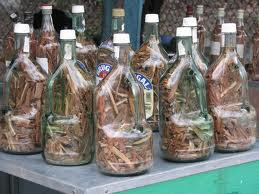 The herbs vary from recipe to recipe and can be bought in packets or inside the empty bottle for you to prepare yourself. The herbs will usually include a range of medicinal plants such as anamu, season vine, princess vine, maguey leaves, and West Indian milk berry, plus cinnamon, cloves, star anise and basil. The first thing to do is to take the bitterness out of the herbs and twigs by filling the bottle with red wine or gin and leaving it for around a week before throwing it away.  Then you refill the bottle with 1/4 honey and 3/4 rum, and it is ready to drink.  Some people will add more red wine as well as the honey and rum. The longer you leave it the more potent it is. You can keep refilling the bottle some say up to 20 times before starting again. 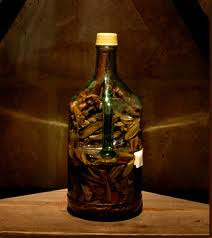 My second M is for Mangu. Apparently the word comes from Americans, who tried it when they invaded the Dominican Republic in the early 20th Century. They sat there eating mangu and said "Man, good", and as Dominicans usually leave the ends of the words it became known as mangu.  Mangu is made by boiling green plantain bananas and then mashing them with salt and pepper, butter and a little water or milk.  It is traditionally eaten for breakfast with fried salami, fried eggs and fried cheese.  It is very addictive and is one of my favourite Dominican meals.

My third M is for a drink called Morir Soñando which means to die dreaming, and this really is a dreamy drink. It is basically freshly squeezed orange juice, milk, sugar and ice all mixed together, and drunk very cold.  Instead of milk, many people use evaporated milk and some will use a different juice.  My favourite is with freshly squeezed grapefruit juice and evaporated milk - absolutely delicious.  You do have to be very careful to keep all the ingredients cold or it will curdle. There is a recipe here which gives you the quantities of each ingredient and advice on how to make it. 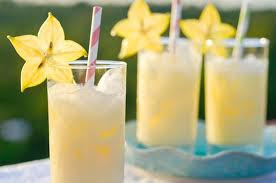