A Tale of Nuts

I used to own a colmado, and every week would go shopping in the warehouse and the market for stock. I was always looking for new things to sell, and the Dominican staff would always tell me that the interesting things I bought would never sell. "No sirve" they would say, "It won't work."

But I persevered and one day I was in the market and I saw sacks of raw peanuts, and thought it would be a good idea to sell them. 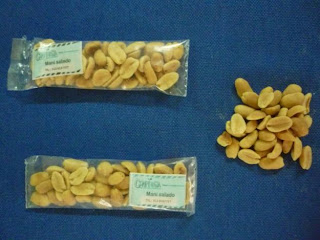 I rang the staff and said I had seen sacks of peanuts and they told me they would have to be put in little plastic bags, roughly the size of a condom, and then they could sell them at 5 or 10 pesos depending on the size. They could not be sold straight from the sack apparently. Flour, rice, sugar, washing powder, beans can all be sold from the sack and weighed out, but not peanuts.

So I bought 50 lbs of peanuts, and hundreds of little plastic bags and took them home.

I spent 3 days filling the plastic bags with peanuts and sealing them with a knot, and proudly took them into the colmado. "No sirve," I was told, as they were raw. I explained that we ate our peanuts raw in England and demonstrated by eating a packet, while the staff looked on horrified and told me at best I would have severe stomach problems and at worst I would die. They told me that in the Dominican Republic they would have to be roasted. 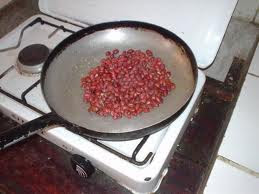 I went home with all my packets of nuts, had neither stomach problems, nor did I die, but spent the next 3 days unknotting all my packets of nuts, and roasting them in the oven and on the top for around 40 minutes each lot. It took for ever, and used a months supply of gas. I was then instructed to cover them with a sprinkling of salt and leave them to cool.

I then spent another 2 days stuffing and knotting all the little packets again and went back to the colmado. "No sirve," they said. They have to be peeled.


Back home, open up packets again and start peeling. It was obvious this would take weeks, until I was shown that you just rub handfuls between your hands whilst blowing at the same time. The nuts are then peeled, but the house is full of peanut skins.


A week later all the bags were done yet again. This time the staff was content, and the nuts sold. They asked me to do some more. Not on your nelly, as we say in England.

Moral of the story. Do not expect Dominicans to eat the things we eat in England, as they will often  tell you they "No sirve"!  You do not die if you eat raw peanuts. Making and peeling home roasted peanuts takes ages but they are delicious!