Shoe shine boys, known as limpiabotas are a well known part of Dominican culture and society. They are to be found in every town, usually in the centre near the park, and there are more in the tourist areas. Their ages vary from around 7 to 17 and in some of the major cities especially, they not only clean shoes, but also run errands, and are even tour guides. In fact in 2010, 22 of them received certificates from the Ministry of Tourism in the Colonial Zone in Santo Domingo due to their knowledge of the area.


Many well known people were shoe shine boys at one stage in their lives. The most famous from the Dominican Republic were Sammy Sosa, the baseball player from San Pedro de Macoris, and Johnny Ventura the merengue singer, Dr. Peña Gomez the leader of the PRD, and José Rafael Corporán de los Santos, a television and radio producer and presenter. From America, James Brown, Rush Limbaugh, Lee Trevino and Rod Blagojevich were all shoe shine boys at some point.


I am not sure what I really thought about shoe shine boys. I assumed they were poor, came from poor families and were trying to make money to help provide food. I decided that I would like to know a little more, and so I went to the park and met up with three of them for a chat. I must say, I expected this to be a sad post about poverty here, similar to my post about the dwendies here. I was wrong. 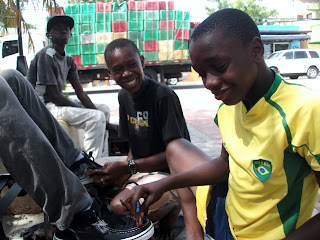 I spoke with José Francis and Jefferson, both aged 15 and Roberto who was 16. All three of them were born here, and are second or third generation Haitians. Their parents all have Dominican cedulas.  They spoke fluent Creole and fluent accentless Spanish. Jefferson also spoke English. They all had the boxes that the shoe shine boys carry, full of rags, brushes, different colours of shoe polish, both liquid and solid wax, liquid soap and a metal implement to scrape mud off shoes. 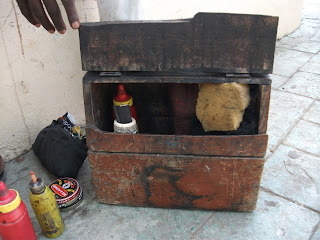 I was surprised to find out that all three of them were at school. Roberto was in 8th grade, José Francis in the first grade of High School and Jefferson in the second year of high school. During the school holidays and at weekends they work an 11 hour day, from 8 in the morning to 7 at night, but during the school year, they fit their work as shoe shine boys around school, working in either the morning or the afternoon and then again in the evening.


The normal rate is 15 pesos to have your shoes cleaned, although some people pay less, and they said an average days wages was around 100 pesos which is around US$2.50. A good day was 150 pesos. This money is then taken home and all of it given to their mother for food. All three lived with their mother and siblings. The fathers of José Francis and Jefferson were working in Haiti, and occasionally sent money back. Roberto’s father had left and he didn’t know where he was.
José Francis had 4 brothers and sisters, Roberto had 7, and he was the youngest, the rest were working in the capital apart from a 20 year old sister at home, and Jefferson had two brothers at home with his mother.


I was surprised that they were studying, as I had an impression, I am not sure why, that shoeshine boys had no education, but what surprised me even more was what they wanted to do with their lives. They did not have near impossible dreams which were unlikely to be realised. José Francis and Roberto both wanted to go to university and become lawyers. They wanted to defend people and to help the poor. Jefferson wanted to work in tourism, and was taking extra English lessons. They said they would carry on working as shoe shine boys to fund their education.


I was really impressed by these three entrepreneurs, especially these days with employment being hard to find. Unlike many young people here, they didn't spend their days hanging around, complaining that there was no work. They work a 7 day week, from dawn to dusk, for a tiny reward, which was very refreshing and impressive. I really do wish them well and hope they realise their dreams.