He comes to the gate twenty times a day to chat, or sometimes to shoot me with a plastic pipe and then he ducks down behind the wall so I don't shoot him back. Today he shot me with a twig, yelling "bang bang" as he shot me. The ice cream man came and as I was buying him an ice cream, I explained the twig was a gun. Chivirico looked at me like I was a total idiot and told the ice cream man it was a twig. 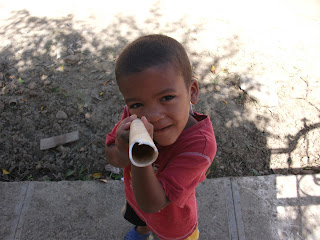 His real name is Eury and his lives with his grandparents. His aunt is the girlfriend of my stepson, Alberto. His mother is not on the scene - she lives near the park and for some reason doesn't want him. His father is Alberto's girlfriend's brother who  has another wife now and two more children. His new wife is the daughter of my neighbour, Lala, and they live next door to me. Everyone goes backwards and forwards between the houses.

They call Eury Chivirico but I don't know what it means. Rico is rich and chivo is goat, not that that helps me much. He is amazingly bright, but not good with time at all. He told me he gets up early, at one o'clock, and he goes to bed late at six o clock. Obviously he is already in tune with Dominican time. 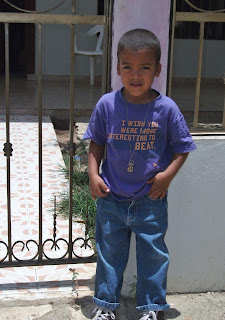 He has decided he wants to be my personal security guard and when I asked how much he charged he said 3,000 pesos - around US$75. I informed him that that was an awful lot of money but he said he needed it to buy milk for his brother and sister. I gave him 20 pesos. He then collared my husband and said he wanted to be his security guard and he paid him 10 pesos.

He now stands outside the house guarding it with a twig, and is sometimes joined by a friend, who rarely wears clothes so I have no idea where he keeps his gun! 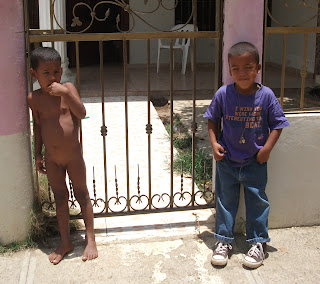 Today Chivirico asked for his wages again - a tiguere in the making. I told him the 20 pesos was for 15 days which didn't go down too well.  He asked if the 15 days would be up tomorrow. He really is adorable and makes me howl with laughter everytime he opens his mouth!