This week was one of those typical weeks in the Dominican Republic with more than a touch of frustration, mixed with lots of  laughter, some sadness and joy.

I have an old jeep which I love. It is a 1988 model, so is pretty old and I don't use it very often as public transport is so cheap and reliable and I also like walking. Anyway, some friends are coming to stay from Canada and will be wanting to drive around so I decided to have it serviced to make sure it was all fine. I knew it needed an oil change and there was a funny clonking noise from the front wheel which needed looking at. I asked the mechanic to do a full service. 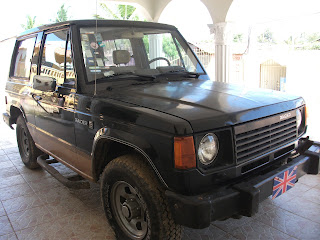 The jeep came back, and seemed perfect, until I went to drive it to the supermarket and it was raining. He hadn't checked the wiper blades which had rotted. Silly me, I thought that was part of a service but obviously not. So, no problem, we bought two new wipers and my husband said he would put them on when we stopped to put petrol in the jeep.  If it was up to me, I would check how they were fixed at the moment, read the instructions on the packet, and then fit them. The Dominican way is pull off the old ones, take out the new ones, throw the packet with instructions away and just jam on the new blades. The rain had stopped so there was no need to check that they worked and off we went to the supermarket.

We approached the bridge over the river Yaque which was full of people and cars. A young girl had drowned in the river, which is an all too common occurrence here. Last year 20 people died in this river. There were even more crowds of people when we came back around an hour later as the medical examiner had arrived to pronounce her dead. Very sad. 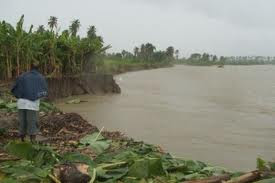 It started raining on the way back so I switched on the windscreen wipers. The one on the passenger side flew off. Apparently it didn't matter as only the driver needs to see. It was rescued from the side of the road and jammed on again. A mile or so further on the clonking started again from the front wheel.

The great news this week was that Felix Sanchez won the 400 metres hurdles for the Dominican Republic. 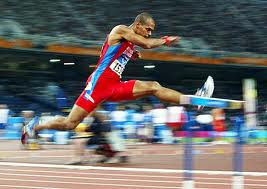 He won the first ever gold medal for the Dominican Republic in Athens 8 years ago, and to repeat the feat was amazing. When he stood on the podium receiving his medal he was in tears, and it was heartwarming to hear the 80,000 crowd in London supporting him with their cheers. I couldn't decide if I was prouder of him being Dominican or the British with their support. 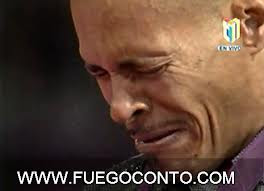 I was really looking forward to watching the Olympics and upgraded my satellite package to ensure that I could see them. Nothing, nada, zip. Called the satellite people who said that no they would not be showing any of it. Very frustrating and my internet signal is so slow that I can't see it on line either. Nevertheless it was  a great night for Dominicans in the Olympics as another Dominican came second in the 400 metres flat race, Luguelin Santos, and at least I could watch that on Dominican television.

So, it has been a frustrating week all in all, and I was woken up this morning with a cat yowling, stuck up a tree. Having got up to see what all the fuss was about, I could see why she didn't want to come down! 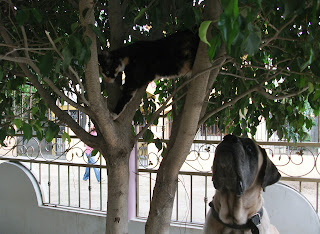 I think I would stay up the tree too with that waiting for me.
Posted by Lindsay at 12:22 PM

Email ThisBlogThis!Share to TwitterShare to FacebookShare to Pinterest
Labels: Barrio Life, Cats and dogs and other animals