The market in Dajabon (never again)


I have friends from Canada staying with me at the moment, just for a few days. One of the great advantages of having visitors is that it makes you get out and do things. They wanted to visit the market at Dajabon, which is the border crossing from Haiti in the north of the country. Checked Google maps and it said it was 76.4 kilometres and would take 1 hour and 14 minutes. Fine I thought. Unfortunately I did not realise that in the same way that a Dominican minute is not the same as an English minute, a Dominican kilometre is much longer than an English kilometre.

As you remember I had been having problems with my jeep, with a clunking noise from the front off side wheel and the jeep was also very bouncy. It went back to the mechanic again, and another 5,000 pesos later, around US$125 he declared it perfect, and announced that he had tightenened everything up.

Off we set. In a comment on my last post, fellow blogger Steph said that things would get better. They  didn't. The first thing I noticed was that the steering wheel was now sideways. This meant it was hard to hold in my normal driving position, and impossible to see the gauges when driving. I had no idea how it had managed to become sideways either. Undeterred we set off. 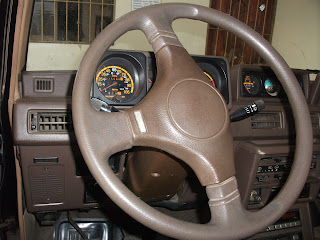 I then had to turn right. That was also near impossible. For some reason everything was now so tight that the wheels would turn left with no problems, but would not turn right, well only a little, so that every time I needed to make a right turn, I had to do a three point turn, well more like an 11 point turn. This was somewhat disconcerting, and caused great amusement amongst other road users, laughing and pointing at the ‘stupid gringa’.

We continued, and only 30 minutes into the journey, bouncing and clonking along the road, the front offside tyre exploded. I have no jack – I know, stupid woman – but this being the Dominican Republic it doesn’t matter at all as within seconds a man driving a bleach truck stopped. You can buy bleach from a tank on the back of his truck. We then discovered what ‘I have tightened everything up’ means. There was no way the wheel nuts were budging. Eventually a motocyclist stopped too, and with lots of banging and smashing with rocks, the tyre was off and the new one on. Paid the guys an US$7 tip between them and continued on our way, still bouncing and juddering. 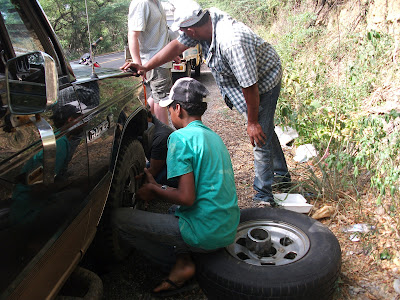 We were then ready to continue on our journey, but the bleach man's truck wouldn't start. I had jump leads so we tried that, but to no avail. In the end he said to push his truck and he would jump start it. We were on a hill so we ended up pushing him backwards. Luckily it worked straight away and off we went again towards Dajabon.


Once we reached the town of Sabaneta we stopped again and bought a spare tyre, another 1600 pesos and asked how much further it was to Dajabon. One chap said 40 minutes, but only 30 if you drove slowly (?), to an hour and a half from someone else.


Maybe it would have been a little quicker if the road only had cars on it, but we were obviously in the middle of cattle country and kept getting stuck in the middle of herds of beautiful floppy eared cows. 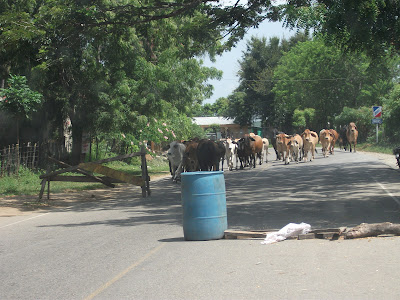 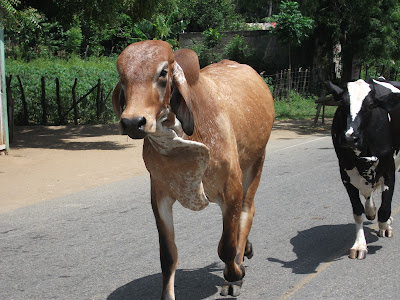 Eventually we hit Dajabon after three and a half hours and 150 kilometres according to the jeep's instrument panel. The priority was lunch and a loo, and then we went to find the market. Firstly however we stopped at the border and looked over the river Massacre into Haiti. It was a most peculiar feeling knowing you were looking at another country. There was nothing there, just a sort of market and the river was full of naked men bathing, and women washing clothes.

A small boy was on the bank of the river begging for 5 pesos, and I once again thought there but for the Grace of God I was in my body and not in one of theirs. I  had a feeling of desolation looking across at the barren landscape knowing if I wanted to I could go there, but they could not come here. I decided not to complain about anything over the next week, as my troubles seemed totally insignificant. 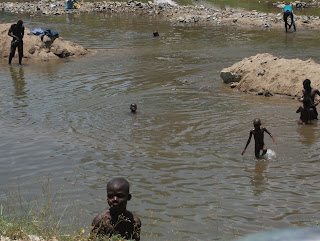 We checked out the border control on the Dominican side and then made our way to the market, ending up stuck in long lines of cars, trucks, motorbikes and people before managing to find somewhere to park. 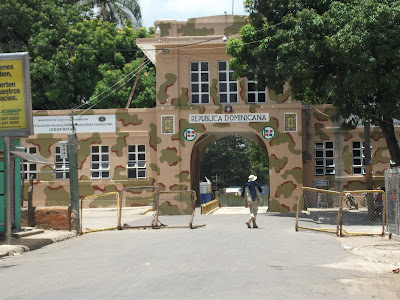 I have quite simply never seen anything like this market. It was enormous, part outside and then a massive blue building with stalls inside, upstairs and down. The first thing to hit you is the smell of sweaty bodies. The stink was appalling, and clung to our clothes all the way home. It was hot, very crowded, dusty and crazy.  People were rushing everywhere. Women with bags and containers on their heads yelling what they were selling. Men rushing hither and thither with wheelbarrows, empty and full. 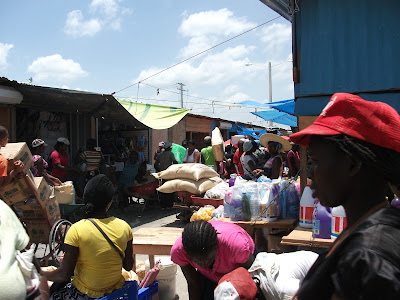 I asked my Canadian friends how long they wanted to stay there, praying they would not say hours. Luckily they suggested 10 minutes. It seemed like an awfully long way to go for 10 minutes, but I was in total agreement. We went into the inside market where it was a little cooler and a little less pungent and I bought a bag of hot chillies for 20 pesos, and that was all we bought. 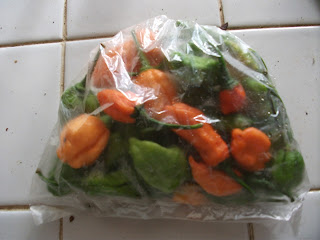 There were clothes, shoes, bags, electrical goods, food of all descriptions, household goods, cleaning materials, and apparently all at good prices, although we didn't pause to check. We just wanted to get out of there.
People were eating, sleeping, lying on piles of rugs, sheets, and blankets. It was an experience I will not forget, but nor will I repeat it. 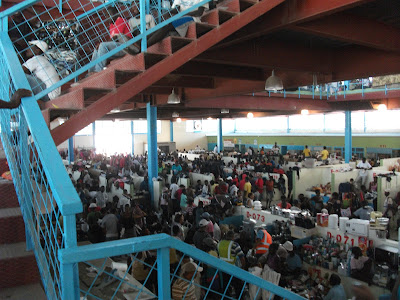 We came home a different route. It took 2 hours, and was a much better road and was 165 kilometres via Monte Cristi on the north coast. There were no cows, no pot holes and the landscape was flat, barren and desolate compared to the way there which was green, lush and mountainous. It always amazes me that this country has such a wide variety of landscape and micro climates.


As we were on one of the main routes from Haiti into the DR it was full of military checkpoints. They are looking for illegal Haitians, illegal guns and drugs. We were stopped at two out of the ten. When they wave you down you have no choice but to stop as they have a long plank of wood with nails in, and if you don’t look like you are stopping they put it on the road and you say good bye to a tyre or two. The first guy who stopped us was nice and after a couple of questions let us continue, but the second was very threatening and suspicious of the fact we did not have passports on us. I handed over my Dominican identity card (cedula), but he wanted to see my residency which I did not have with me. I suggested he read this blog then he could confirm that I went to the capital to get my residency renewed. I think he decided I was crazy and in the end he too let us go.

We eventually arrived home, and Chivirico, my bodyguard, came running down the road to open the gate. I was relieved to be back, hot, smelly and sweaty, with a burned right arm from having the car window open as it has no air conditioning. 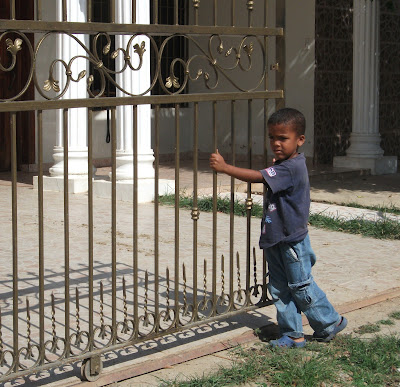 I arrived home and pondered on the fact that I was the proud owner of a bag of chillies. To buy these chillies had taken 8 hours in total, 1500 pesos in petrol, 300 pesos in tips for changing the wheel, 1600 pesos for a new tyre, 60 pesos in bottles of water, 450 pesos for lunch, and 25 pesos to people with ropes across the street asking for money for a street party, leading to a grand total of 3635 pesos or not far off US$100. Plus the 20 pesos for the chillies themselves.

I cooked an Indian curry last night with the chillies. They were the hottest I have ever eaten. The market at Dajabon had its revenge.
Posted by Lindsay at 11:12 AM