I had to go to Santo Domingo, the capital of the DR on Monday to renew my residency. It has to be renewed every two years, and mine was two years out of date - ooops! Given that they are supposedly bringing in new regulations I thought I had better get it sorted or risk possible deportation. We left here at 4 am planning to get a bus to Santiago and then another big, air conditioned bus to the capital where I was planning to sleep. A mini bus came along so we hopped on that, and it ended up going all the way to Santo Domingo at break neck speed. I was squished in the back and could see nothing, which I think was just as well.

It is apparently owned by a local member of the army and he goes every day early morning and back and then goes to work! It only cost 300 pesos which is around 5 pounds. Fantastic value!

A journey of four hours turned into two, albeit not very comfortable, and we were outside immigration by 7am. This immigration department bus with barred windows was waiting outside which did not fill me with confidence, but inside everything went smoothly. Firstly pick up form and complete and give fingerprints, wait, then pay, wait, then have photo taken, wait, then pick up residency card. So I am now legal again!


Then it was off for a pre - interview chat. I am going to be interviewed for Dominican television by Mariasela Alvarez who is famous, so I am told. She was the first cover of the new Hello! magazine here last week and is very beautiful. Anyway it was just a chat first and she is supposed to be coming to interview me tomorrow, so I will report back once it has happened. The interview will be in Spanish so tonight I need to learn my verbs!

Then it was off to see a friend of mine in the Colonial Zone who has bought an old colonial house and is doing it up to make what will be a small hotel, or a place which can be rented out for weddings or events. I don't know what I was expecting, but it was simply breathtaking and is not even finished yet. 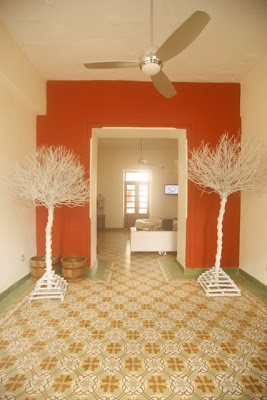 I felt like I had stepped back in time with original colonial floors and doors but amazing modern touches as well. It is just waiting to have a pool put in the courtyard and then will be ready for events, but he is renting out rooms now. 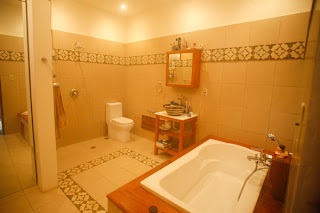 The bedrooms were to die for, especially the showers which hit you with roasting hot water from every angle. Check it out here. 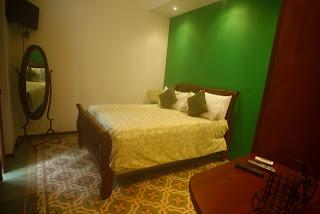 We then went out to a french restaurant in the Colonial Zone. The Colonial Zone is gorgeous at night, with the beautiful old buildings you feel like you have gone back in time, and I kept expecting to run into squads of soldiers from the 16th century. The restaurant was called La Taberna Vasca and I was a bit concerned it would be stuck up and posh! 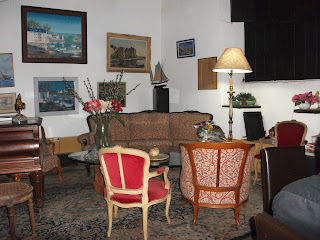 It was neither. It was amazingly comfortable, like being in an old colonial house, with impeccable service, fabulous food and a really lovely atmosphere. They have a website here. 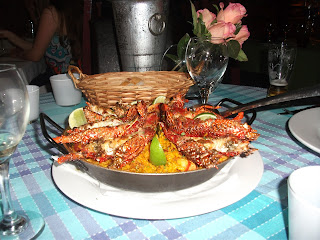 Just look at how many crayfish there are in this paella!

I met a few more people, did a little more work and then back to my barrio! I had forgotten how great the capital can be, and how different a place from where I live. I ate some fabulous food, had English tea and bacon sandwiches so was in seventh heaven.

Also yesterday I was quoted in the Daily Telegraph about blogging, which is one of the UK's top newspapers, which you can read here.

So a very successful and fattening couple of days. I was so impressed with the Sanchez hotel in the Colonial Zone and the restaurant la Taberna Vasca, I am thinking of doing a 'Lindsay recommends' section, but only for places I have visited and tried out. If you know of any places I should check out then let me know.