Introduction to Dominican Politics - the caravana

There will be an election for a new President of the Dominican Republic on 20 May - only a month away, and there is no one living here who is not aware of it. I thought, therefore that those who read the blog and who are not up to date with the ins and outs of Dominican politics might like to learn a little about it, so every so often over the next month I will post on different aspects.

Just as a little background first, there are several political parties but only two main ones, so I will concentrate on those, with apologies to the rest. The two parties are the Dominican Liberation Party (PLD) and the Dominican Revolutionary Party (PRD). Excuse my ignorance but I am not sure what the PLD were/are being liberated from nor the PRD having a revolution against.

Luckily I do not have to explain the manifestos to you, nor which party is more left or right, as it appears there are no manifestos as such and no clear political direction. Both say they will help the poor - which neither have done before, sort out the electricity, again neither party have ever managed to do that, stop corruption, which both parties appear to excel in, etc etc.

So what is the main difference between each party? I think it is the colour - the PLD is purple, with a little gold sometimes, and the PRD are white. If you support either party you have to wear the appropriate colour. If you support the PLD you are called a Peledeista and the PRD a Peredeista. Simple really.

Given the lack of manifesto, they don't really have a lot to say, so instead of television debates or long speeches or rallies, as far as I can see the major form of campaigning is the caravana and at the moment these are happening nearly every day.

A caravana is basically a long line of cars and motorbikes, which travels through the towns. The front car has the presidential candidate sitting on the roof with his legs through the sun roof. In the case of the PLD it is Danilo Medina and in the case of the PRD, Hipolito Mejia also known as Papa (Daddy). The rest of the front car will be covered with bodyguards hanging off the side. You can tell the bodyguards as they wear baseball caps, sunglasses and are usually very large.  They wear a hat to minimise the risk of being sunburned as these caravanas can go on for hours. Hipolito sensibly wears a cowboy hat, although I have often seen photos of Danilo without a hat so I assume he wears lots of sunscreen.

Behind the first car are a whole string of other cars, with important people such as Senators, Deputies, Governors and Mayors also perched on the roof of the car with their legs through the sunroof. The person sitting in the back seat of the jipeta (SUV) will usually be charged with holding onto the ankles of the important person when driving fast or over bumpy terrain.

Following that are even more cars and along side the whole caravana and bringing up the rear are thousands of motorcycles. Most motorcyclists will be holding a flag of the appropriate party and often a bottle of rum as well. There will also be large trucks covered with speakers blasting out the appropriate party song or slogan. The slogan for the PRD is "Llego Papa"  translated as "Here comes Daddy". Apologies but I don't know which slogan the PLD are using this year. 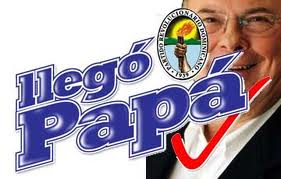 The streets will be lined with thousands of supporters dressed in the appropriate colours, wearing party baseball caps,  and waving party flags, hoping that something worthwhile will be thrown out of the jipetas in the convoy - be it salami, chickens, even money. It is amazingly noisy, hot, dusty, totally chaotic and great fun.

Caravanas are not cheap to organise as the local party activists will have to pay for all the flags and hats to issue to the people, plus their transport to get them to the appropriate route, fuel for the jipetas, cars and motorbikes which take part, cold drinks for everyone.

At the end of the route the presidential candidate will usually say a few words and then slither back inside the vehicle and go home ready for the next one the next day. Whilst I can see that they are good fun, although hot and tiring, I haven't yet worked out how they persuade the voters to vote for one particular party.
Posted by Lindsay at 1:05 PM