Come on Irene (and Silly Boy) 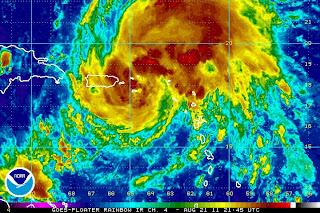 Hurricane Irene arrived last Monday, well very early Tuesday morning. The track moved dramatically in the last 36 hours. Originally she was due south of the the Dominican Republic, then a direct hit on the capital, Santo Domingo, then a direct hit on us, and she finally ran around 50 miles off the North coast.

When there is a hurricane en route I spend a lot of time checking where it is going, where it might go and how strong it is. There are lots of excellent sites on the internet and they tell you exactly at 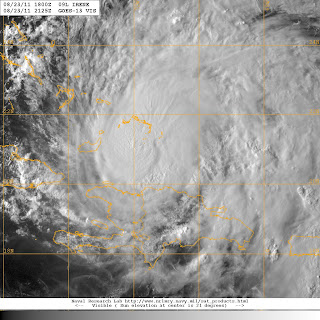 at what time it will arrive at your location, so that you can plan accordingly and prepare. As we have no glass in the house there is no need to board up anything, we just make sure the mobile phones are charged, the car has petrol in it, and all loose items in the garden are moved inside. I moved the car away from trees and warned number two son that if it was bad he would have the dogs sleeping with him. The Dominicans, however, totally ignore it! I tell them a hurricane is coming and they smile and say "it won't come here".

This time they were right. I was woken up at 3am with wind and rain which lasted until about lunchtime, but there was no damage. Once again we had managed to miss a direct hit. 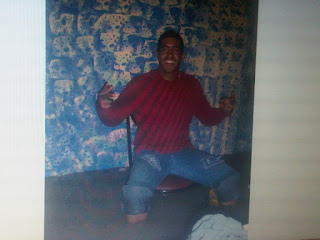 However, as often happens when there is a lot of rain the rivers overflow and all of the settlements near the river are flooded out.

This picture was sent to me by a friend in San Pedro de Macoris. She said that there were even fish swimming inside the houses. But as usual the Dominicans take it in their stride. Often the police and emergency services try to persuade people to leave, but they are concerned that their possessions will be stolen and so they stay put.
At least there are no soggy carpets and most people manage to dry things out quite quickly. 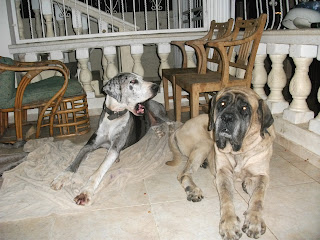 The local vet - the one who also stuffs animals - called a month or so ago and asked us to take an English mastiff who had been kept in Santiago zoo in a small cage for his whole life. His name was Mammoth, pronounced Mamoo, and he was terribly thin and covered with sores. He is slowly improving and here he is with my Great Dane, Tyson. I used to think Tyson was big until I saw Mamoo. We changed his name to Sumo and that is sort of his name, but we discovered he is blind and walks into things all the time, so he now usually called SillyBoy as that is what we end up saying to him all of the time
. 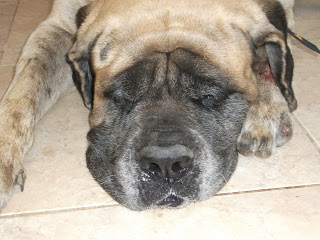 As you can imagine he is causing quite a stir and we have a fairly constant stream of people with their female dogs wanting him to mate with them. This entails locking up our other dogs and then hoping Silly Boy does his thing. Personally I think he should have some privacy but this being the DR we always have a crowd of around 50 at the gate yelling encouragement and giving him advice. None of it works. So far although everything appears to be in working order, he has been unable to actually get it in so as to speak. He is just too large for the females and even though the owners of the females have made them stand on boxes and tables he is unable to aim correctly. Still he is enjoying trying I think.
Posted by Lindsay at 10:14 AM No comments: