Another month has flown by, although nothing particularly interesting has happened.

I am more or less alone in the campo although Danilo pops home when he can take a break from campaigning. The Central Electoral Office website has a timer ticking down the time left to the elections, and I stare at it watching the seconds going down. As I write this it says 57 days, 13 hours, 42 minutes and 12 seconds. It can’t go fast enough. Having said that it is now stuck and as I was finishing this blog post the bloody thing hasn't moved lol. Goodness, even the elections will be on Dominican time.

Life was becoming pretty stressful with the animals, as I had the mother hen Coja and her baby chicks under the balcony but the stupid chicks kept escaping through the chicken wire and then they couldn’t get back in. So every time I heard frantic cheeping I had to run outside to get them back in, without letting the dogs out in the process. Even worse was when they escaped from under the balcony and went next door into the dog run. Then I had to distract the dogs, close the dog run so they couldn’t murder the chick and then put it back.

The other issue was the escaping puppies, and it did not matter how many times I blocked up holes in the fence, the little buggers always found a way of digging under the fence, ripping my repairs apart or Grita Mucho would simply jump over.  On one of his visits home, Danilo said he would help me to fix the fence so he cut down half a tree and left me with the machete to chop it into fencing. The machete lies where he left it. Apart from the pups escaping, which was always stressful waiting for them to come back, the neighbour’s chickens kept flying into our garden – obviously on suicide missions as none make it out alive.

So as you can imagine, I am sitting at my lap top trying to work and every few minutes running outside to rescue chicks or screaming my head off waving a broom as dogs pull chickens to bits.

Hence I implemented a stress reduction strategy. First I let the mother hen and chicks roam free in the garden and at night they went all by themselves into the cellar to sleep. Sorted. 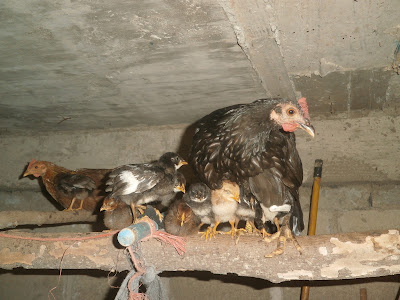 Then I stopped the dogs going out and had them inside, letting them go out every hour or so for a 5 minute run and pee break. Sorted.  The only problem is that they are bored so there is lots of charging around the house and climbing over furniture. 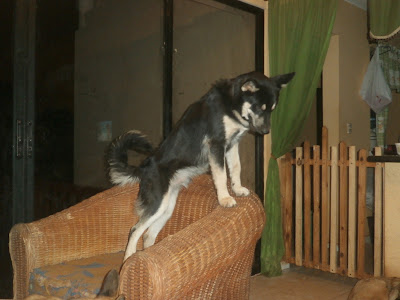 I tried keeping them in the dog pen but that just results in major howling sessions and Grita can climb over the fence and escape. Should change her name to Houdini. She also needs to stay in at night now, to stop her escaping and has a nasty habit of picking up whatever she can find and throwing it off the upstairs balcony which means every morning is a trek around the garden to pick up knickers, cushions and other assorted items. At least she doesn’t chew them which is more than can be said for her destructive brother, Sweepy who to date has destroyed one television remote control, two phone chargers, around 10 packets of cigarettes, roll upon roll of toilet paper, a few books, some bars of soap, January to March of my diary, a roll of sellotape, umpteen electricity bills and seven cushions. He is currently working his way through the rattan furniture.

And my hen and chicks plan went perfectly for a few days until the chicks started disappearing one by one. There are now none left. I think the culprit is probably Sukin's cat who comes into our house at night to eat any cat food he can find, as he now has no home, but is obviously hungry. Still I have no proof, so he is innocent until proved guilty although the neighbours are losing chickens too and I know it isn't my dogs as they are all inside.

So, not long to go until life gets back to normal although at the moment I have no idea what normal will be. Danilo is confident he will win – but then he was last time, and he says this time is different. He is top of the polls so all we have to do is keep him there which means I have to be in major fund raising mode.  The guy in second place is with the PRM which is a new party, split off from the old opposition party and the current mayor is in third place. The party Danilo is now with, PLR have agreed to support the current president, Danilo Medina which is good news so we are keeping everything crossed. More posters have been done, 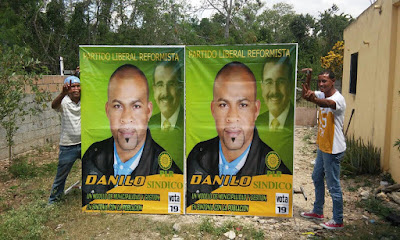 Not sure it looks like him mind, seems to have stretched his head a little.