Week from hell followed by a tiny ray of sunshine

Long time not blogging again. Apologies. November was a bit of a disastrous month, but with an uplifting and rewarding ending.

It began with both Danilo and Chivirico having their UK visas denied. Danilo as they did not think he would come back – most odd as why would a Dominican lawyer want to stay in the UK and why would his wife who works and lives in the DR want to stay there as well,  and Chivirico was denied as Danilo would not be going and they seemed to think he would be going unaccompanied and forgot I was going. No right of appeal or review or question or anything so we will try again next year. It was really really disappointing but in the meantime I am going on my own for three weeks and cannot wait to see everyone and eat British food for the first time in 12 years.

Next problem was the goats as we have had a terrible drought and they did not have enough food. We would buy hay to supplement their food but there was none, due to the drought, so every day Danilo had to go off with his machete and search for food for them. We did not want them to be hungry so in the end we had to make the difficult decision to give them to daughter in law’s father to look after. He has a little farm next to a river so there is always plenty of food there for them. I do miss them though.

Now we have two empty paddocks, and Danilo is busy thinking what animals he can keep in them, animals which don’t eat as much as goats. Every day he comes up with another suggestion. We have gone from horses, cows and donkeys, through llamas, ostriches, peacocks – so far nothing there but I am sure some animal will have moved in by the time I return from England.

Next trauma was Rasputin, who hated Goofy with a passion. He would bark and growl at him but Goofy just ignored him, until one day he had had enough and attacked Rasputin. We hoped it would be a one off but it happened every time they were together, so, sadly, Raspi had to go for his own safety and our nerves. He is now happily living in Mao and has been renamed El Rubio. They send us videos of how happy he is so all is well.


Then, the traumas continued. I was sitting at my desk working at 3 pm and  Danilo was off working in Mao. The local mayor starts shouting for me at the back wall. I went outside thinking now what as the goats couldn’t have escaped as they weren’t here any more. He starts talking about the big dogs - Lobo and Goofy the Great Dane. I said they are here and turned round  and they were nowhere to be seen but the gate was open. He says they are in the street and the Great Dane was hit by the truck which delivers our water. I grabbed two leads and rushed out up the road where Goofy was lying on the verge and Lobo was looking on from the other side of the road. The truck has hit Goofy hard in his back end they said and threw him across the road. A crowd of people were gathered and said they would stay with Goofy as Lobo took off running down the road. Eventually running through people’s houses and yards I cornered Lobo and took him home. I ran back to Goofy. He couldn’t  move. I asked  the locals to call 911, not sensible as it doesn’t operate in our area, but a guy then turned up with a wheelbarrow. He said it was canine 911! Everyone was too scared to lift him. He had no obvious sign of injury but he wouldn’t  move. I called Danilo who said he was on his way and I sat on the ground with Goofy's head in my lap. We waited. The crowd increased covering the road and slowing down all the cars. Danilo arrived in Alberto's car. Goofy still wouldn’t  move. The boys and Danilo lifted him gently into the trunk of the car and drove him home. They opened the trunk and.....GOOFY JUMPED OUT AND RAN ALL AROUND THE GARDEN. Slightly lame in his front paw and that was it. What a bloody drama queen.


Just after the Goofy incident, one morning Danilo yelled at me that there was a baby boxer dog in the garden. She was tiny, covered in mange and starving – you could see every bone in her body. 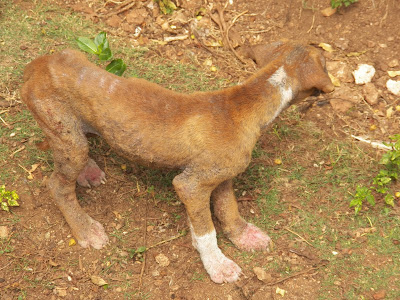 We gave her some food and water and expected her to disappear. She didn’t. 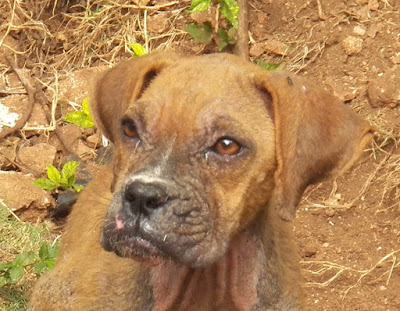 She moved into one of the spaces under the balcony. So we bathed her and with the help of some friends began to treat the mange. As we began the treatment her fur began to fall out and she moved from under the balcony to the back door. 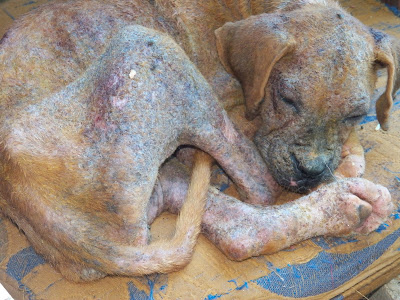 Slowly she began to put weight on, the mange went and she moved into the house. 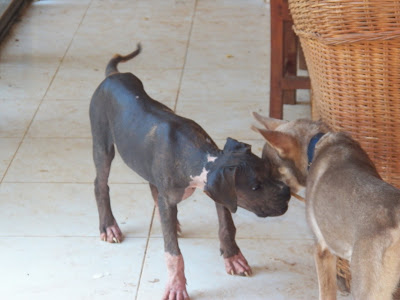 Grumpy Grace is now growing her fur back and is an established member of the family! 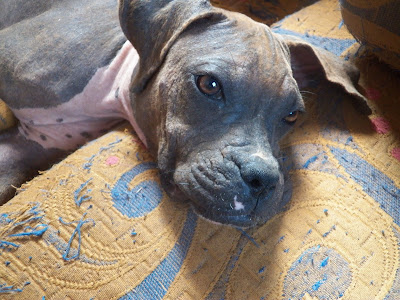