The crazy life goes on

Ooops sorry again for taking so long. Usual excuse too busy. Plenty to update you with so prepare for a long read, with few photographs as my camera has decided not to work any more. Hopefully a new memory card will do the trick.

The run up to Christmas was crazy busy with work and Danilo up and down to the south coast campaigning. We thought we might actually cancel Christmas due to a shortage of funds but a kind donor provided the cash so I did the usual British Christmas lunch and the kids turned up. I didn't bother putting  up the tree as the three puppies are at that full on destructive stage, so it would have lasted five minutes.

One of my favourite pastimes is sitting on the balcony with my morning coffee but that pleasure has been taken away from me, as the usual superb Dominican workmanship was short lived. 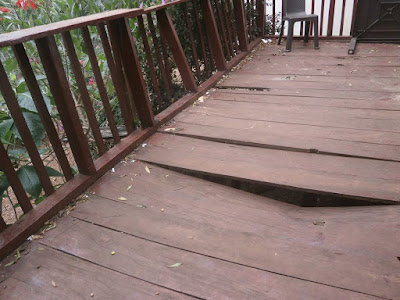 Not only are the floor boards breaking but so is the balustrade. 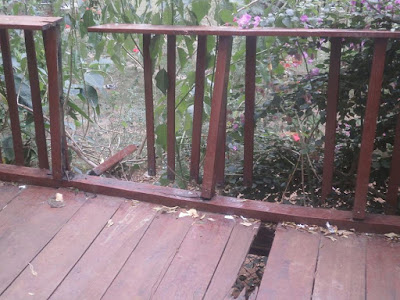 It is seriously wobbly and so needs to be replaced - I assume with concrete but not sure when that will happen.

Christmas came and went, and then I had two lots of visitors, both from overseas with their Dominican partners. Not only is it nice to speak in English for a while but the visitors always come laden with goodies, so my chocolate supply has been restocked for a while. 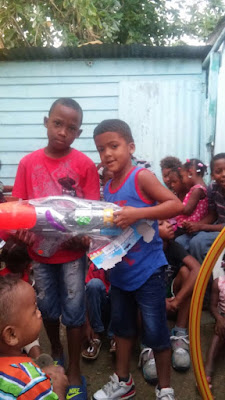 Chivirico decided that he did not want any presents this year from Santa but that he wanted to play Santa and instead of having a sack for him, he wanted to hand gifts out to poor children on Kings' Day which is January 6, the day children traditionally receive their gifts here. We had some lovely donations and off he set to hand out gifts. 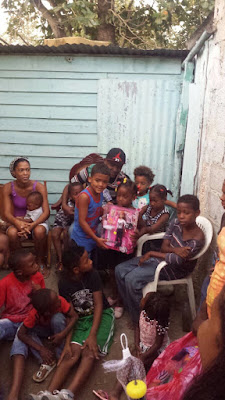 Don't think I am being creative here, I just can't get the pictures to go where I want them to!

So, back to politics which is having a major impact on my life as Danilo is having to spend more time campaigning than he is here. Now I have no problems at all being on my own, but it has its challenges.

Firstly the car. My beloved jeep. 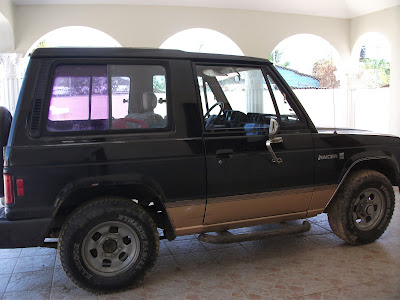 I don't know if you remember but it broke down around six months ago. They said the pistons broke but it has taken me ages to save up the cash to fix it.  The piston broke as beloved husband drove in in second gear for miles - as he can only use first and second in a manual car. He can't do the jiggly bit to put it into third. So the local mechanic says RD$30,000 to fix which is a fortune, around U$700 and which we don't have. The jeep sits there for four months as I try to save the money and meanwhile I walk. Everywhere. No taxis or motoconchos here. Then Danilo announces he has a mechanic to fix it and off it goes but it appears this mechanic couldn't fix it as he was born after jeep was built. So Danilo finds a man who actually works with Mitsubishi engines - perfect he thinks. The jeep returned on Christmas Eve with Saya (number one dwendy) who went to pay the final amount which was more than I would have paid locally. I checked everything as have learned to trust no mechanic. Windscreen wipers. No only do they not work, which they didn't when the car went in, there are no wipers anymore! Exhaust had to be soldered - wasn't, was tied on with wire. Coil appears to have disappeared and has been replaced with hand made one! White smoke pouring out of the back as it appears the mechanic didn't know it was a petrol engine and put diesel in it. And for the icing on the cake, a new oil filter was fitted, but no oil was replaced. Saya drove it over 150 miles with no oil. I filled it up with oil but there are still clouds of white smoke and I have been told that it is fine, the smoke will go, and I don't need windscreen wipers as there isn't much rain.

So I sort of have transport but I daren't go far in case the lack of oil caused serious damage, nor on main roads as the white smoke continues to pour out of the back.

And then there was the earthquake. I was sitting at my desk working and it sounded like a train was coming. The dogs all ran in, and I went to run out to see why there was a train coming as there are no trains here, and I promptly fell over as the floor was moving. Then, all the windows shook, bottles flew off the kitchen counters and once I made it outside I was met with a massive dust cloud. My first and I hope my last earthquake. It was only a 4.6 but the epicentre was not far from me, around 10 miles northwest.

As I mentioned in the last blog, Danilo is now candidate for the PRL party, which also supports Danilo Medina to be president again. This is his new poster.

He planned a major launch for the new campaign and I was a bit surprised to get the poster for that. 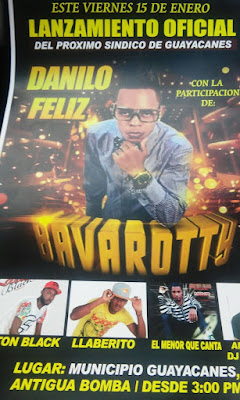 Yes it involved some sort of concert with the main artist being none other than Bavarotty, and yes he does sing sort of opera amongst rapping.

The launch was a success, with three quarters of the electorate turning out for it so so far so good. Apologies again for the delay, must do better,